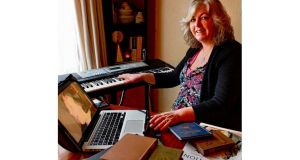 Video may have killed the radio star, but modern technology has just given traditional music a new lease of life.

Gino Lupari, bodhrán player with Four Men and a Dog, is in his living room in Magherafelt, Co Derry, instrument in hand, drumming it into his student how to develop as a player.

Nothing unusual in that, except that his pupil is not in the room with him but at home in Sydney, and the lesson is being conducted via Skype. Thanks to the web, minstrels no longer have to wander.

It’s the musical equivalent of having Robbie Keane in your front room for an hour every week, teaching you via live video link how to score a goal when you’re one-on-one with the keeper, all for the price of a Leaving Cert grind.

Launched last month, the Trad Mentors are a collective of some of Ireland’s finest traditional musicians who have been teaching individually at festivals and workshops for years. Now they have come together to offer music lessons via Skype to budding musicians worldwide.

“There are various online traditional and folk music schools out there, but we wanted to create something that gave the learner a more personal, one-to-one experience,” explains uilleann piper and producer John McSherry.

McSherry got the idea from traditional singer Niamh Parsons, who had met a woman at a concert in New York who was having fiddle lessons by Skype from a teacher 40 miles away.

“John said, wouldn’t it be great to gather a group of great musicians covering every traditional instrument and offer masterclasses,” said Parsons.

“The Online Academy of Irish Music offers pre-recorded videos and is very good but ours is interactive. If a piper wants to find out how John McSherry does his wonderful twiddly bits, John can show him and talk him through it.”

Parsons, who also teaches traditional music at Ballyfermot College of Further Education in Dublin, is adamant that teaching online is as effective as face to face.

“You lose absolutely nothing. I can hear and see the student – whether it’s talking about sourcing repertoire, or breathing, or pronunciation, I can discuss things with them exactly the same.

“Irish traditional music is huge everywhere – Europe, America, Australia, Japan – so we hope to offer fans of the music and musicians wanting to learn the traditions a great personal way to do it.”

If it catches on, it could be the biggest transformation in how traditional music is passed on since the first gramophone record by Sligo fiddler Michael Coleman was posted home from New York in the 1920s.

Coronavirus: Creches under pressure could receive fast-tracked financial support 17:04
Páirc Uí Chaoimh testing centre closes due to lack of kits 17:00
Cocooning Q&A: How does it work? Who must do it? Can people visit my home? 16:58
Former Turkey goalkeeper Rustu Recber hospitalised with coronavirus 16:53
Coronavirus: Managing the surge in cases is a day-to-day battle 16:48