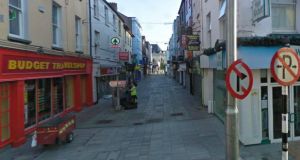 Two men have been jailed and a third remanded in custody for sentencing following an attack in Cork city centre on two young women at whom they shouted sectarian abuse before laughing and running away.

Sgt David O’Callaghan told how Ms Rashid and Ms Everston observed the three men hassling a female on her own near Princes St at around 2am on the day in question and shouted at them to leave her alone only for the three of them to turn on Ms Rashid.

O’Flynn caught Ms Rashid, whose mother is German and whose father is Palestinian, and pulled off a traditional headscarf she was wearing before Kelly joined in and hit her while O’Sullivan punched her in the head knocking her against some shop shutters.

Kelly also punched Ms Esterton, a Dutch citizen, knocking her to the ground

and as Ms Rashid tried to get up and retrieve her headscarf, she was kicked

before all three. who had been drinking, shouted at her “you f***in gypsies, f***ing Muslims, f***ing terrorists”.

Ms Everston, who had her eye socket fractured in the attack, said: “How could these guys be so mean. They hit and kicked girls, hitting and kicking my friend on the ground, three against one. I still cannot believe what happened.”

Douglas Road, Cork to two years with the last six months suspended while he

Judge Ó Donnabháin said there were particular circumstances in the background of O’Sullivan from The Walk, Herons Wood, Carrigaline, and he remanded him in custody for sentencing on July 30th.

1 Dig for remains of Red Hugh O’Donnell finds skull and coffins
2 Miriam Lord: Leo’s Phoenix pecs just a storm in a bag of cans
3 ‘I will be alone for rest of my life,’ says woman raped as she slept
4 Archaeologists are ‘quite sure’ they have found Red Hugh O’Donnell’s burial place
5 Leaving Cert: Teachers advised to ‘destroy’ documents relating to students’ grades
Real news has value SUBSCRIBE