The new breadbasket of the world? 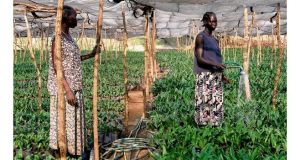 As swathes of their country’s land is leased, cleared and prepared for food production by foreign companies, Ethiopians are divided over whether this constitutes ‘agro-colonialism’ or much-needed development, writes MARY FITZGERALDForeign Affairs Correspondent

‘WHY ATTRACTIVE?” reads an Ethiopian government poster pinned to a wall at the rambling offices of the Gambella regional investment agency. Next to photographs of lush fields and a map showing huge tracts of land earmarked for investment comes the answer: “Vast, fertile, irrigable land at low rent. Abundant water resources. Cheap labour. Warmest hospitality.”

Gambella, a remote and sparsely populated region located where Ethiopia’s western tip borders southern Sudan, is in many ways an unlikely choice for investors. Its searingly hot, malarial lowlands, coupled with ethnic tensions that have at times erupted into violence, have given the region a somewhat forbidding reputation in Ethiopia.

But in the past year Gambella has become one of Africa’s biggest testing grounds for the growing phenomenon of land leasing, whereby investment firms and rich countries lacking sufficient arable land snap up huge swathes elsewhere to produce staple food crops. The trend has prompted accusations of “agro- colonialism” and “land-grabbing”, but some argue that it could hold the key to the continent not just feeding itself but also the world.

This new scramble for land is rooted in fears, amplified following the 2007-2008 global food crisis, that world food supplies may run dangerously low in the future. The UN’s Food and Agriculture Organisation (FAO) estimates that in order to feed the world’s projected population in 2050 – some nine billion people, up from six billion today – agricultural production must increase by a yearly average of at least 1 per cent.

“Humanity has never come to the brink of such crisis before . . . if there is a potential catastrophe for mankind, it is related to food,” says Sai Ramakrishna Karuturi, managing director of Karuturi Global, an Indian company which is the world’s largest producer of roses. Such apocalyptic calculations brought Karuturi, who runs flower farms in Kenya and Ethiopia, to Gambella as a prospective investor more than two years ago. He made an agreement with the regional government to lease 300,000 hectares – an area larger than Luxembourg – for 50 years at an annual rate of 20 birr (€1.12) per hectare to farm crops including maize, wheat, and rice. Karuturi predicts that, when operating at full capacity, the farm will employ 25,000 people and produce three million tonnes of cereal per year.

“We are on a mission to make a difference . . . when we produce three million tonnes it will be nearly half a per cent of the world’s cereal production,” he says. “How many people will have the opportunity to do something which meaningfully impacts on humanity like that?”

So far, almost 65,000 hectares of the land has been cleared of the forest that carpets much of the Gambella region. Bright-green John Deere tractors imported from India bounce over stubbly rows of turned soil (“The most potent I’ve ever seen – anything can grow here,” says one supervisor), while women from the nearby settlement of Elliah tend more than 100,000 palm seedlings at a nursery on the banks of the River Baro. Land is also being cultivated on a 10,900-hectare farm the company has leased near the central Ethiopian town of Bako.Investors such as Karuturi are promising to build infrastructure, including schools and health centres, where little or none exists, in addition to creating jobs and producing food for both the Ethiopian and wider African market as well as those overseas.

Haile Assegide is a former Ethiopian government minister who now serves as chief executive of Saudi Star Agricultural Development Plc, a company which was given 10,000 hectares in Gambella to farm rice for 60 years rent-free. He estimates that 45 per cent of the farm’s yield will be sold on the Ethiopian market. Saudi Star, which is owned by Sheikh Mohammed Al Amoudi, a Saudi Arabia-based billionaire who was born in Ethiopia and maintains close ties with the country’s ruling party, aims to increase its agricultural holdings in Gambella to 250,000 hectares. It has similar plans for the expansion of land it has leased in another part of Ethiopia. Assegide argues that the massive investment will result in employment for locals, and corporate tax revenue and foreign currency for the federal government.

He says the firm is also examining the possibility of handing over some of the land in Gambella to local families once it has been developed. “We are doing a study on it at the moment, but it will probably involve allocating one hectare per family,” he says. “It will be a type of outsourcing . . . Our interest is not only to harvest rice, wheat and corn, it is also to develop the region.”

BUT MANY INEthiopia and other African states experiencing this new land rush are wary of such pledges and wonder who exactly stands to benefit in the long term. Aid groups, including Oxfam, have raised concerns about the use of farmland to produce food for export from countries such as Ethiopia, which is reliant on aid to feed almost one-tenth of its population. Some critics worry that indigenous communities may be sidelined or exploited, while others warn of the environmental impact of decades of industrial farming.

Last year Madagascar cancelled a controversial agreement with South Korean company Daewoo Logistics that would have allowed the firm to produce corn and palm oil on 1.3 million hectares, around half of the country’s arable land. Public anger over the deal contributed to the collapse of the Madagascar government.

Merera Gudina, a political science professor and chairman of Ethiopia’s largest opposition grouping, is one of the sceptics. He says his party plans to make the issue a central plank of its campaign ahead of parliamentary elections due to take place in May. In addition to voicing concerns about the displacement of pastoralists from land which government officials claim is “virgin” territory, he questions the motives of foreign investors now scouting Ethiopia for suitable land.

“Will they just be using Ethiopia to feed their own people while Ethiopians go hungry? That is very worrying,” he says.

Ethiopia’s prime minister, Meles Zenawi, says that such agricultural investment will not take away from his government’s insistence on small-scale farmers being at the centre of Ethiopia’s development efforts.

Meles says he is under no illusions regarding the motives of investors. “We have to be aware of all the possible risks because there is not going to be any free lunch. The pioneers who are here to develop agricultural land are not philanthropists, they are businessmen out to get profit – which is fine so long as we too benefit as they do.”

Neither is he particularly worried about whether they produce food for the local market or export. “I assume they are bona-fide capitalists and so they will sell it where it makes more sense for them to sell. That is fine with me,” he says. “If they export their products to Saudi Arabia because is more profitable than Ethiopia, let them bring the dollars back and we will use the dollars to buy the type of products we need for ourselves from the international market . . . My hope and expectation is that we will feed Ethiopia through the produce of our small-scale farmers.”

Many in Gambella are adopting a wait-and-see approach. “Our region needs development, we know that,” says Omud, a clerk in his 30s. “It is too early to judge whether this will prove to be positive, negative or a mix of both.”

KARUTURI INSISTS THAThe is attuned to local sensitivities. His company turned down an offer by the regional government to relocate the Elliah settlement, he says, and next month it will bring electricity to the village for the first time.

“It is their land and we are the strangers, so we have to put in efforts to integrate and not make them feel alienated,” he says. “I keep telling my people we have to be very careful and sensitive in the way we engage with them.”

The company pays local workers a daily rate of 10 birr (56 cents) – which Karuturi compares to the going rate of eight birr for farm labour in Ethiopia – and it provides three meals a day on top of that. Asked about reports that Karuturi employees at the Bako farm have complained about their wages, he replies: “I could pay 50 birr and they would still complain. Who does not complain about their pay after all? . . . I am paying a meaningful wage – what more can I do? I am not a philanthropist sitting here to distribute my money.”

Karuturi’s land deal was agreed with the Gambella regional administration, but since then Meles has changed the rules. The Ethiopian constitution allows regional governments to manage their land – all land belongs to the state – but from now on all commercial farming deals must be negotiated through Addis Ababa.

“ we saw large-scale interest, we as a federal government felt that we had to take another step to make sure there are no mishaps,” says Meles. “We have to make sure that interact with one entity, that there is a process that is transparent . . . and which is with eyes wide open.”

Karuturi acknowledges the need for safeguards. “There will be concerns within the government that this should not be misused. That worry is unfounded in ] case,” he says. “We have no problem with any further assurances that the government wants, because we mean business. It’s a learning process for all of us, the entrepreneurs and the government. It’s new . . . the jury’s out.”