The girl with the diamond smile 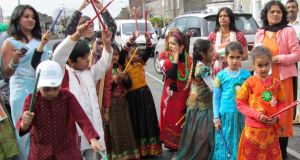 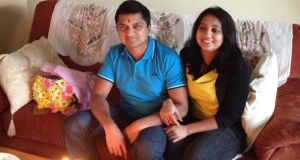 Savita Halappanavar and her husband Praveen photographed at home in Galway. 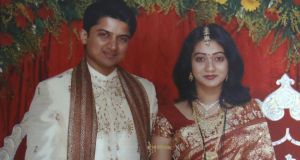 Praveen and Savita on their wedding day.

Everyone used to call her “the girl with the diamond smile”, and not just because she had a tiny diamond in one of her teeth.

Savita Halappanavar was “always smiling, always chatty, always had something nice to say, very positive – just a lovely, lovely lady”, recalled one of her friends in Galway last month.

Savita Yalagi was 26 when she married Praveen Halappanavar in her hometown of Belgaum in southwest India five years ago. It was a hot day in late April and she was worried about her make-up getting messed up, recalls Praveen.

Wedding photographs show a beautiful bride and a smitten groom. Praveen, from Haveri, a city of about 1.5 million people about 110 miles away in the same Karnataka province, says Savita “took my breath away”.

She was the third andyoungest child of Andanappa and Akamahadevi Yalagi, who adored her. They have spoken since her death of her spirit, her strength, her joy in her friends and her sense of fun.

Dancer
“From the moment she was born we knew she was going to rule the house,” said her father Andanappa in an interview with the Times Crest of India. “And we turned out to be right.”

Her mother Akamahadevi said: “If anyone was ever sad Savita would not give up until she made them happy. Even her older brothers did anything she wanted them to do. She loved to dance. She taught herself in front of the TV and she would come into the kitchen while I worked to show me her latest steps.”

She and Praveen met on an Indian matrimonial website, Shaadi. com, when he was in Galway, and they Skyped frequently. He would fly back to see her and meet her family and over time their relationship developed.

Friends of Praveen in Galway have spoken of how shy and reserved he was before Savita came. He shared a house with two other men and he didn’t socialise, but when she arrived the couple were soon at events every weekend, taking part in dancing competitions and organising events for the Indian community in the city.

Circle of friends
“I soon came to understand what her family told me about her,” says Praveen, “Savita was not only the leader of our house, but of her circle of friends as well. It wasn’t ego either. She just led and people accepted this.”

Children loved her. “Even before she went into hospital she was getting all the kids ready, choreographing them for some international cultural event,” says friend Devi Chalikonda.

“They all used to ask her about the diamond in her teeth and she’d laugh and say, ‘Oh you’ll have to go to India to get one.’ She was so good with kids,” says another friend, Chalikonda V Prasad.

Vibrant
Such descriptions of her lie in brutal contrast to what happened subsequently, with Savita dying at the age of 31, just days after being admitted to Galway University Hospital, having presented with an inevitable miscarriage. She was 17 weeks pregnant.

Praveen spent the last week of Savita’s life by her bedside, watching his vibrant, assertive, worldly wife deteriorate relentlessly, thousands of miles from her home.

Having brought her remains home to India, and after he supported her parents and family through her funeral, he returned on November 18th last, looking for answers.

Praveen and his friends in Galway had sought answers from Galway University Hospital and the HSE, and felt they were making no progress. This was why he agreed to talk to The Irish Times a week after her death and why he was willing to have Savita’s name and photograph used. They wanted people to know who she was. In the interviews Praveen has given he has been poised, dignified and true.

Gentle determination
Anyone who heard his interview on RTÉ’s News At One on the day the news emerged, or who watched him being interviewed by Miriam O’Callaghan a week later, could not but have been affected by his gentle, dignified determination.

Savita was a person with whom all women could identify, and Praveen – who has been a magnificent advocate for her throughout – is a man with whom husbands, brothers, fathers and friends can identify. Praveen “changed everything”, Orla O’Connor of the National Women’s Council said recently.

Through this process he feels he has been appallingly treated. He spent almost a fortnight in India at the time of her funeral without, he says, any contact from anyone in Galway University Hospital or the HSE. His request for a public, independent, sworn inquiry into Savita’s death wasn’t acceded to. When the HSE set up its inquiry it included three members of staff from the hospital where Savita died, though they were removed after objections from him and others.

On his return from India nobody in Government made any attempt to meet him, he says, until Minister for Health James Reilly managed to fit him into his schedule on a trip to Galway more than a week after the story broke. He was promised a preliminary report from the HSE inquiry before Christmas but didn’t get it. He was promised a copy of the final report before its release yesterday, but again he didn’t get one.

All of Ireland had followed his story, coroner Dr Ciaran McLoughlin said in April, at the end of the eight-day inquest into Savita’s death.

Turning to Praveen – who had sat alone at the back of the court throughout the proceedings – Dr McLoughlin offered him the deepest sympathies of everyone in the court and beyond.

“You showed tremendous loyalty and love to her during her last moments. You will always be watched over and protected by the shadow of your beloved Savita. You are in our thoughts during this painful and difficult time.”

Hospitality sector is being made ‘pay for the sins of others’ 12:01
Ulster Bank CEO tells staff ‘all options’ on future on the table 12:00
Coronavirus: Dublin hospitals under ‘significant pressure’ as county set for Level 3 12:00
Solskjaer scathing of England’s handling of Mason Greenwood 11:57
Coronavirus: WHO warns of ‘alarming’ spread across Europe 11:46