The dark reality behind television images from our childhood 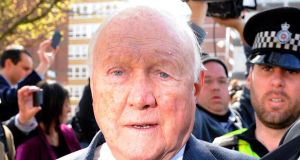 Everybody under 60 has a television childhood, a sort of snowy screen in the memory that fizzes into life at peculiar times, most often these days when some television performer dies.

Or is accused of sexual assault, perhaps against underage boys or girls. Or, in the case of Jimmy Savile, both.

Stuart Hall’s admission last week, after a long period of adjective-laden denials, that he had indecently assaulted 13 girls, some of them underage and the youngest aged nine, has brought these television memories to a new turmoil. The excellence of British television in the 1970s – Jimmy! Stuart! Gary! – over here in multichannel land has taken on a sinister aspect. And so we find ourselves in a sort of light-entertainment hell.

This is an east-coast (and Northern Ireland) problem, and we don’t expect the rest of you, who could not steal British television programmes from the airwaves back then, to understand. In fact we envy you because you don’t understand.


Cheeky chappies
It was family television, which you watched together. It was part circus, part Blackpool pier – and the Irish have always loved Blackpool pier. Tommy Cooper and Leeds United were in the ascendant – yes, it is that long ago. Stuart Hall was everywhere. Jimmy Savile was a force for good, what with his charity work and everything. They were the unstoppable cheeky chappies. No wonder they could do what they liked with their fans; it was what they liked that was the problem. And they got away with it for so long – almost a lifetime in the case of Hall, who is 83.

He looked pretty frail as he emerged from court with his solicitor. But not frail enough, as the Daily Telegraph reported, to forget to move his house into the name of his wife of 55 years, as he did in February, leading to speculation in recent days that he was shifting his assets to avoid having to pay damages to victims.

These guys are tough – we’ll never know how tough they really are, or were. Jimmy Savile brazened everything out until his death, he fought his way to the heart of the British establishment – he gave marriage advice to Prince Charles and Lady Diana, and stayed with Margaret Thatcher – and his sexual attacks on young people and in some cases children – one a boy of 10 – went entirely unpunished. The last sexual offence recorded against Savile took place in 2006, and still he got away with it. No wonder he was frequently photographed wearing rose-coloured glasses.

Stuart Hall, of It’s a Knockout, a lot of football commentaries and the regional news programme in the Manchester area, fought the recent accusations like a tiger. As recently as last February he called them “pernicious, callous, cruel and above all spurious”. He praised his family for effectively saving the life of a wronged man: “But for their love I might have been constrained to take my own life.”

Seasoned Stuart Hall observers have pointed out that “constrained” is a very Stuart Hall word – faux intellectual or, in this case, as he might once have said himself, simply faux. Personally I don’t remember him saying anything more than “Oh dear”. Sometimes twice. This seemed to cover everything from a missed goal to the Duchess of York stumbling in the 1987 production, It’s a Royal Knockout .

Television light entertainment came from British music hall – a dark place at the best of times. In the wake of the Jimmy Savile case Rolf Harris, Dave Lee Travis, Freddie Starr, Jim Davidson, Coronation Street actor William Roache and public relations operator Max Clifford have all been arrested and questioned in relation to sex allegations. They have all vigorously denied the accusations against them.

Some people would say, and have said, that we must remember that many of these charges date from the 1970s, when sexual codes were different – at least for men. Anyone wishing to explore this subject further should read Anne Robinson on being a young female journalist in a newsroom, at that time, as outlined in her interesting autobiography, Memoirs o f a n Unfit Mother .


‘Ladies’ man’
What the Stuart Hall case has done is blow the cover of someone who was known as “a ladies’ man”, as his former colleague Linda McDougall called him. She also says he was “a complete nuisance” around adult women.

Colleagues watched wearily as he disappeared into an old medical room at the BBC with one adult woman after another. Back then such behaviour was regarded as nothing more than what any red-blooded straight male would indulge in, had he been allowed. No one thought the red-blooded male would abuse nine-year-old girls as well.

Stuart Hall was protected by his television fame. One of the girls whom he abused, Susan Harrison, told her father what had happened and her father said of Hall: “He is famous and we are nobodies. Nobody is going to believe you if you tell.”

And so Top of the Pops, It’s a Knockout and Seaside Special are hurled out into the ether, no longer sentimental memories but embarrassing reminders of how we were all fooled, and of the pain of kids who had no one to turn to.

Fianna Fáil and Sinn Féin leaders round on each other in bitter Dáil clash 21:47
Judge rejects Trump criticism as Roger Stone jailed for lying to Congress 21:36
Martin tells Varadkar: ‘Nobody has a pathway to opposition’ 21:25
Animal rights advocates call for zero tolerance for sulky racing on roads 21:21
Bloodstained note dropped from robber’s pocket leads to DNA match 21:17