Bono: Tax regime has brought Ireland ‘only prosperity we know’ 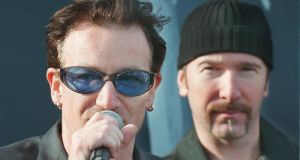 U2 singer Bono has said Ireland’s tax regime, used to attract multinational companies such as Apple, Facebook and Google to Irish shores, has brought Ireland “the only prosperity we’ve known”.

Speaking in an interview in today’s Observer newspaper, Bono said Ireland’s tax policy had given the country “more hospitals and firemen and teachers”.

“We are a tiny country, we don’t have scale, and our version of scale is to be innovative and to be clever, and tax competitiveness has brought our country the only prosperity we’re known,” he said.

“That’s how we got these companies here . . . we don’t have natural resources, we have to be able to attract people.”

“As a person who’s spent nearly 30 years fighting to get people out of poverty, it was somewhat humbling to realise that commerce played a bigger job than development,” said Bono.

“I’d say that’s my biggest transformation in 10 years: understanding the power of commerce to make or break lives, and that it cannot be given into as the dominating force in our lives.”

His comments come as Minister for Finance Michael Noonan prepares to signal a “significant” overhaul of the wider corporate tax regime in an effort to underpin multinational investment in the State.

Although Mr Noonan will declare in his Budget speech this Tuesday that the so-called double Irish will be phased out over a period of years, there is no settlement yet as to when it will close definitively.

The loophole means big US tech companies and multinational pharmaceutical groups are able to reduce their effective tax bill well below the current Irish corporation tax rate of 12.5 per cent by moving most of their taxable income from an operating company in Ireland to a second, related Irish company outside Ireland.