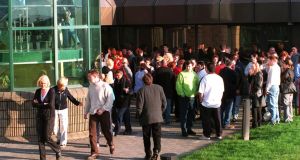 Staff leaving the Apple factory at Hollyhill, Cork in January 1999 after 500 job losses were announced at the plant. Photograph: Mark Kelleher/News Pic’s.

Despite the impression that might be created at yesterday’s US senate hearings Apple’s Irish operations are not some shady brass-plate operation. The computer maker has had a major facility in Hollyhill on the north side of Cork since 1980 – just three years after the company was formally incorporated in the US.

In its early days the facility focused primarily on manufacturing and distribution of computers in Europe, and to a lesser extent the Middle East and Africa. In an age of ESB strikes, empty factories and spiralling youth emigration, Apple’s investment of £7 million and promise to create 700 jobs was warmly welcomed.

Throughout the 1980s and 1990s Apple was seen as a good corporate citizen in the Munster region and senior executives, while not courting the media, were happy to talk about its activities in Hollyhill.

Although there was repeated speculation from the late 1980s that particular functions might be moved to lower-cost Asian locations, Cork avoided any major job losses until 1999 when 500 were cut.

With about 1,400 Apple staff rattling around a facility that could house 2,500, there was a feeling that this was a body blow and that it was only a matter of time before the Californian computer upped sticks entirely. Local politicians darkly predicted that Apple would never again support similar levels of employment in Ireland.

But quietly and out of the glare of the media spotlight over the following five years Hollyhill was transformed into an “integrated operations centre” which employed 1,500 people. By last year 2,800 staff in Cork were providing services to Apple subsidiaries around the world, as well as distributing and selling Apple products in a number of countries. In a rare public announcement, Apple said it would create another 500 jobs in Cork and was building a new office block to accommodate the workers.

However, this recovery story is one that has largely gone unwritten as it has coincided with a major change in attitude by Apple to its communications. Media requests on matters as simple as the numbers employed in Ireland were regularly met with a “no comment” or ignored. The use of unlimited companies and other even more opaque company structures meant little could be gleaned from company filings in Ireland.

This reflected the personality of Apple founder Steve Jobs. Jobs dramatically left Apple in 1985 when he felt he was being sidelined. His return in 1996 heralded a much more secretive and even paranoid Apple, with staff who leaked information being dealt with ruthlessly and on more than one occasion being summarily sacked.

That attitude trickled down to facilities around the world, including Cork, which began to play a bigger role in facilitating Apple’s rapidly growing profits. With the US senate subcommittee now turning the spotlight on Hollyhill, seasoned Apple watchers don’t expect the iPhone maker to be rolling out the red carpet for the press anytime soon.