App designed by Maynooth students is up for US prize 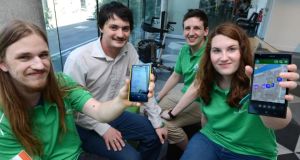 A frustrating trip to a hotel in London sparked the idea for an app developed by four students from NUI Maynooth, who are bringing their creation to a competition in the United States tomorrow.

The Access Earth app, which allows people with disabilities to preview and review access in buildings, is the brainchild of three computer science students – Matthew McCann (24), Jack Gallagher (22) and Dónal McClean (25) – and a biology student from Massachusetts, KC Grant (23).

As the only team from Ireland in the final 35 of the Imagine Cup finals, they will be competing for the grand prize of $50,000 and the chance to meet Microsoft’s Bill Gates.

The Imagine Cup allows students from across the globe to showcase how technology can improve the lives of others and McCann, who has cerebral palsy and uses a rollator, believes the app will help those with limited mobility.

“Back in 2012, myself and KC took a trip to London. It said on the [hotel] website that they were accessible but when we got there, there were three steps up to reception,” he says.

“Then the hotel took us up to the room, which they said was accessible, but the doors were narrow and I couldn’t fit it [the rollator] in. So from that, I felt that it would be great if they actually told us how accessible it was rather than saying Yes or No.”

The app is available to download from Microsoft’s Windows store and accessearth. org but it will be available to Android and Apple users in the future.

Gallagher says Access Earth is unique in that users can submit detailed and to- the-point reviews of buildings all over the world.

“Currently there are two apps like ours – Wheelmap and DisabledGo. Wheelmap use crowdsourcing to get their information and the only information they give you is three things. There’s accessible, hardly accessible or not accessible,” he says.

“DisabledGo give you information on a five-point scale; so they might give parking a three out of five, but what does that mean? Ours is a rating system where you answer Yes or No questions that are easy to understand.”

Access Earth users can review specific facilities like ramps or lifts that are available wherever they go. If a user wants to submit a review of a building, they answer questions based on building regulation guidelines provided by the National Disability Authority and the Irish Wheelchair Association.

Grant says so many travel websites offer just a Yes or No in terms of accessibility but she hopes Access Earth will be different. “We want to make sure it’s not black or white, we want to give the full picture.”

McClean encourages people to submit reviews so they can expand their database. “We are using advocacy groups like IWA, IWA Sport and Kanchi to get it across to their users and pre-existing community to help spread the word and get users to add locations so future users can see that there are locations added.”

Without the support from Microsoft, NUI Maynooth and Tom Lysaght, the acting head of computer science in Maynooth, Grant says that Access Earth would not be possible.

“We are students so it would be very hard to make the app in our spare time ourselves. Obviously we had the idea beforehand but we thought it would be a great opportunity.”

McCann is quick to add that while competing in the Imagine Cup is a big deal, if the Access Earth app is a success, it will be of huge value to those who need it.

“We want people to know that the app isn’t just for the competition,” he says. “We want to make this a reality and it needs to be done.”