More than 5,000 potato plants to be sown in two-acre study site 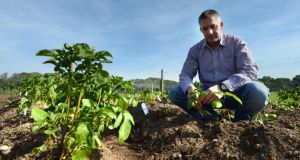 Teagasc hopes to begin planting out more than 5,000 potato plants in the next two weeks, in the second phase of its study into the environmental impact of blight-resistant genetically modified (GM) potatoes.

The agricultural development body began the study last year by planting 48 GM and non-GM potato plants at its Oakpark crops research centre in Carlow. Its senior research officer Dr Ewen Mullins said he hoped planting would get under way later this week if the ground was not too dry. Some 5,274 plants will be planted across two acres. One-third are GM plants, one-third are non-GM and the final third are the organic Sarpo Mira variety. Sarpo Mira is known for its blight resistance, although the eating and processing quality of the plant are not as good as some commercial varieties.

The study is part of the EU-funded Amiga project which has partners in 15 EU states, all involved in research to assess the impact of genetically modified plants on agro ecosystems. The Teagasc study is looking at the impact of the GM potato on soil microbes such as bacteria, fungi and worms. Its Amiga partners in Germany and the Netherlands will be using the Oakpark site to determine the impact GM planting has had on insects and bumblebees.

Teagasc has been criticised by some anti-GM campaigners for undertaking the project, which was approved by the Environmental Protection Agency last July. Dr Mullins said the study was being done because of the challenges facing potato growers. Potatoes are sprayed for blight up to 15 times per growing season but increased EU legislation will curtail the amount of crop protection products farmers can use.

GM technology could breed a blight-resistant potato and have it ready for the market in less than five years, compared with 14 years using traditional practices. But he said it was important to have scientifically sound, Irish-specific information on the environmental impact of GM technology so that people could make an informed choice.

Dr Mullins said Teagasc was neither for nor against GM technology and it welcomed public debate on the issue. It is holding an open day on crops at Oakpark on June 26th and the GM project will be explained to visitors. A GM open day at Oakpark is being planned later this year and Dr Mullins said people on all sides of the debate would be welcome to come and air their views.

He said while it was being claimed the study was putting Ireland’s GM-free status in jeopardy, the State was not GM-free and was already importing almost one million tonnes of GM animal feed every year.

Critics have claimed the study is at odds with Ireland’s green image but Dr Mullins said it would be highly irresponsible of Teagasc to do something that would put Ireland’s food industry at risk as it was the organisation’s role to underpin the agri-food industry.