Widow of late playwright John B Keane laid to rest 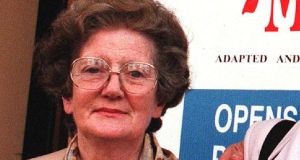 The funeral has taken place in Listowel of Mary Keane, the widow of the late playwright John B Keane.

St Mary’s Church in Listowel heard there was significance in the date of her death: she had died on the Feast of the Assumption of our Lady, a feast day that was dear to her as a person who had great faith in eternal life, said chief celebrant Fr Tom Leane.

“The day of Mary’s death is also the day of rebirth,” he added.

It was also Pattern Day in her native Knocknagoshel, the Kerry hilltop village not far from the Limerick border.

This was the day when the village’s famous banner “Arise Knocknagoshel and take your place among the nations of the earth”, from the time of Parnell, would be unfurled.

Mary, even if she was “the woman behind the man”, was never short of a few phrases herself, her funeral Mass was told. One of her sayings was “a woman is no good without a bit of temper”, her daughter Joanna recalled.

She was also fond of saying “there’s a book in everyone”, Joanna said.

Mary had lost her own mother at the age of five, but was a mother to many, she added.

President Michael D Higgins had called her “that great gatekeeper”, and she was indeed that, making sure John B had the peace he needed to write, Joanna recalled.

During the funeral Mass, John B Keane’s love song for his wife You will be Mine for all Eternity played to a hushed crowd.

Mary had trained as a hairdresser in Castleisland and the couple met at a dance at the harvest festival of Listowel Races in 1949 and married in 1955.

They set up a pub on Lower William Street and Mary worked in the business all her life.

She is survived by her four children – sons Billy, Conor and John and daughter Joanna – and 13 grandchildren.