Malala Yousafzai, the 16-year-old shot in the head by the Taliban last year for her campaign for girls education in Pakistan, accepts the 2013 Tipperary International Peace Award. Video report by Jason Kennedy 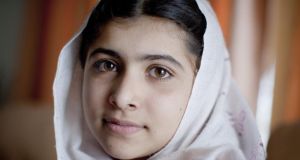 Malala Yousafzai: was shot at point-blank range in the head and neck by Taliban gunmen in Pakistan. She was awarded an honour last night by schoolchildren in Tipperary. Photograph: Press 22/PA

The young woman who would not be silenced walked into the Ballykisteen Hotel in Co Tipperary to loud applause and a standing ovation last night.

Malala Yousafzai, the 16-year-old shot in the head by the Taliban last year for her campaign for girls education in Pakistan, was there to receive the Tipperary International Peace Award.

Past winners include Nelson Mandela, Benazir Bhutto, Mary McAleese and Bill Clinton. And now the girl known as “the most influential teenager in the world” has joined their ranks.

Watched by an audience of invited guests including Pakastani and Irish schoolchildren, Malala – global fame has rendered her surname superfluous – received the award, a specially commissioned crystal Dove of Peace.

A group of school children from Holy Rosary College, Co Galway serenaded her with a song The Flower of Pakistan written by their teacher Mr Quinn.

Already nominated for the Nobel Peace prize, the youngest-ever nominee, the award was the latest in a growing list of international honours for the courageous and disarmingly humble teenager including a citation in Time magazine’s 100 most influential people.

She will return to Ireland next month to be honoured at Amnesty International event in Dublin.

An activist since she was 11 years old, Malala began secretly writing a blog for the BBC which described how girls struggled to receive an education under the Taliban who at times had banned girls from going to school in her region of the Swat Valley in Pakistan.

At the time she passed hand written pages to a reporter who scanned and emailed them to create the blog The Diary of A Pakistani Schoolgirl.

She was also filmed as part of a New York Times documentary and later spoke to television reporters about a potential encounter with the Taliban. “I think of it often and imagine the scene clearly. Even if they come to kill me, I will tell them that what they are trying to do is wrong, that education is our basic right,” she said.

As her fame grew, she began to receive threats from extremists on social media where she was active under her own name.

On October 9th last year, while returning home from an exam on a school bus, she was shot at point blank range in the head and neck by Taliban gunmen who boarded the bus saying ‘which one of you is Malala?’

After local surgeons removed a bullet which had lodged in her shoulder, she was flown to a hospital in Birmingham, England for further treatment.

She has a titanium plate in her forehead and a cochlear implant to address the hearing difficulties caused by her injuries. Malala has since continued her campaign to ensure children’s right to education globally addressing the UN last month on her 16th birthday saying “they thought the bullet would silence me but they failed”.

Organiser Martin Quinn of the Tipperary Peace Convention said he was “delighted” that Malala had agreed to receive the award in person accompanied by her father, poet and education activist Ziauddin Yousafzai. “It is so well deserved,” Mr Quinn said.

The teenager has supported Plan Ireland’s ‘Because I Am A Girl’ campaign.

Mike Mansfield of Plan Ireland said her story had struck a chord across the world. “This young campaigner has become an inspiration to millions. This is an extraordinary, brave young woman, who, when faced with death refused to give up and refused to be silent.”

The message from last night’s ceremony was that the millions of “other Malalas” across the world mustn’t be forgotten.

“The one in five girls globally who are denied an education or the one in three girls every second who is forced to enter a child marriage,” said Mr Mansfield.

But last night all eyes were on the original Malala, the teenager with the shy smile, steady gaze and lion’s heart.