Tusla working to establish facts around death of toddler in Dublin 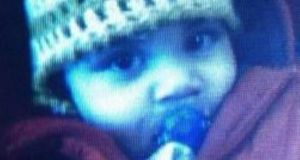 File photograph of Hassan Khan, whose body was found in a Dublin apartment on Thursday

Tusla, the Child and Family Agency, is “working to establish the facts” surrounding its involvement with the two year-old boy who was found dead in an apartment in south Dublin yesterday.

Hassan Khan’s body was found in a top floor apartment in the Ridge Hall complex at Shanganagh Road, Ballybrack after the alarm was raised, shortly after 2 pm yesterday.

It is understood Hassan had suffered stab wounds to the upper body.

Gordon Jeyes, chief executive of Tusla, confirmed the agency had been involved with the family since Hassan had been the subject of a Garda Child Rescue Ireland (CRI) alert in August.

The child had been declared missing but was found some hours after the alert was issued, safe and well with his father, Mohamed Saleem Khan (61) in the Ballybrack area.

A woman known to Mr Khan and Hassan was arrested last night and remains in Garda custody.

It is standard practice that Tusla becomes involved in monitoring a child’s welfare following a CRI alert.

Mr Jeyes would not comment any further than to confirm Tusla was establishing the facts. He also issued a brief statement.

He said: “Following the death of a child, particularly in circumstances as tragic as the death of little Hassan, it is important that we all take the time to mourn a life not lived.

“In the period immediately following Hassan’s death the focus for Tusla will be on supporting those who knew and worked with the little boy and his family.

In due course, the Child and Family Agency will work with any investigating body to provide all information available both in terms of any supports offered previously to the child and his family and any information which may cast light on why this tragic death took place.”

1 Coronavirus: Ireland should ‘look seriously’ at closing borders to keep new infections out
2 'The last time I saw her was when she was being put into the ambulance'
3 Coronavirus: Medical staff may face ‘emotional distress’ over patient prioritisation
4 Cocooning Q&A: How does it work? Who must do it? Can people visit my home?
5 Engineers gather to produce ‘battlefield’ ventilator in war on Covid-19
Real news has value SUBSCRIBE