Its been six months since the Carrickmines tragedy where ten people including five children under ten died. Since the tragedy the surviving family members are still struggling to find permanent accommodation. 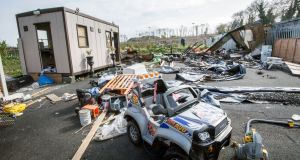 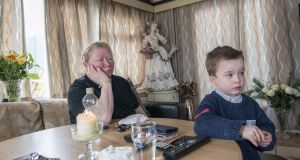 Members of a Traveller family who survived a fire at a temporary halting site in Carrickmines in Dublin last year are calling for a public inquiry into the incident.

They say acts and omissions by Dún Laoghaire-Rathdown County Council in the weeks and days before the tragedy, in which 10 people died, may have contributed to the fire and to the death toll.

They say the council moved the mobile home in which the fire started from where the family had originally placed it to right beside the other mobile homes. They believe this enabled the fire to spread to another unit.

The family also says the fire extinguisher on-site on the night was not working and the water supply to the nearest fire hydrant had been cut off in the months before. They are also concerned that electrical works done on-site the day before the fire may have been a factor.

Sylvia’s brothers, Jimmy Lynch (39) and Willy Lynch (25), also died in the fire as well as Willy’s fiancée Tara Gilbert (27) and their children Jodie (9) and Kelsey (4). Ms Gilbert was four months pregnant when she died.

The site of the fire was cleared by the council in recent weeks. However, the week before it was cleared The Irish Times visited John Connors (15), who pulled his niece Mary and nephew Thomas form the blaze, and Lisa Algan, a friend of the family.

Josie Connors, mother of Thomas, now caring for his surviving children, told how Thomas had originally placed the mobile home he bought for his family about 20m away from the other units on the site. She says the council moved it next to the other units and immediately adjacent to the mobile home owned by his sister, Cathleen Connors. 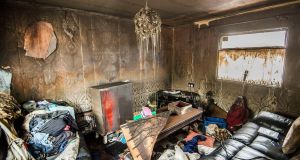 John Connors said he was in Cathleen’ s van watching a film in the early hours of the morning when he heard a “a loud bang, a crash” from Thomas and Sylvia’s van.All the deceased were sleeping in the van.

“I ran out and saw the fire taking hold. I got in and pulled the baby, Mary, out.”

He says he handed her to Cathleen before re-entering the van to get Thomas.

“I ran with baby Mary and put her into my bed,” says Cathleen. “She was alive when I left her. I ran back out to help John, but when I looked back my van had caught fire too. The fire had hopped into my van.

“By the time I got back in, it was full of smoke. I just got Mary out before my van went up too.”

The infant died in hospital later that day, reportedly due to smoke inhalation.

The family is also concerned that the water supply to the hydrant directly outside the site, on Glenamuck Road, had been cut off in the months before the fire. They say this delayed Dublin Fire Brigade by up to five minutes as they located the next nearest hydrant, some 50m down the road.

“What were they were doing? We don’t know. Could they have done something that caused the fire?” she asked.

A spokeswoman for Dún Laoghaire-Rathdown County Council, when asked about the family’s concerns, said: “An investigation into the fire that caused the tragic deaths of the family at Glenamuck Road, Carrickmines, is still under way. This is being undertaken by the coroner’s office, Dublin Fire Brigade and An Garda Síochána. All parties have an obligation to await the results of this statutory process.”

The council says it inspects and checks its halting sites on a regular basis and that, in line with best practice, “there were four fire extinguishers on the Glenamuck Road site which were inspected and serviced every six months.

“The last such inspection and servicing took place in May 2015. In addition, each unit was provided with fire blankets and were fitted with mains-powered smoke detectors.”

The council says a fire hydrant “is present near the site which was used by Dublin Fire Brigade on the morning of the incident on 10th October 2015. It is on the same side of the road and is approximately 50 meters away.”

The council did not respond to a request for comment on the allegation that it moved the mobile home in which the fire started closer to the other units.