Time may have arrived for referendum on same-sex marriage

Opinion: Public support for change has happened faster than predicted 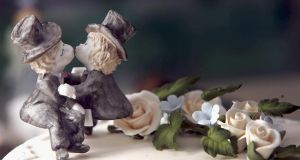 At one time the law of many nations provided that a woman, when she married a man, became one of his chattels: part of his property possessions. The laws of all societies in the area of property and marriage have, thankfully, moved on from there.

At the time of the French revolution and indeed the American civil war the equality of man meant just that: equality between men only and in fact between some men only. Many of the champions of equality between men at those times saw no issue with the legal discriminations then in place against women. The laws of most of the new republics, including the United States, also continued to permit one man to possess another man as a slave. Right up to the latter half of the last century many states allowed for express legal distinctions between people of different colours. Thankfully the laws of most societies have also moved on from then.

The law of suffrage has undergone a similar evolution. Originally only men of property could vote; then gradually came universal male suffrage, and relatively shortly thereafter, following further struggle, women got the vote. All of these changes came at different times and paces in different legal systems but in each instance they marked a dramatic alteration in the original legal concepts.

It would serve the cause of same-sex marriage in this country well if proponents would have the courage to argue openly that what they are campaigning for is a dramatic shift in constitutional law and an appropriate shift. The notion of civil marriage they argue for is radically different from that envisaged by de Valera and the other framers of our Constitution but it is one now more in keeping with the realities of our society.
Changes in public attitude
Writing here after the Civil Partnership Act was passed in July 2010, I offered the view that because the introduction of same-sex marriage in Ireland would require a popular vote to amend the Constitution it would take at least another 10 years before such a referendum could usefully be put.

The pace of change in public attitude in Ireland on this issue suggests, however, that I was wrong. I now think it might be possible to do so earlier and maybe even within the lifetime of the current Dáil.

The efforts of those groups actively campaigning for same-sex marriage has had some effect on the pace of change in attitudes, but developments in other countries – such as the US and Britain – and other influences operating on the position of voters in the “moveable middle” have had a more significant impact.

Fianna Fáil, as part of its repositioning, has also overcome traditional reluctances.

Only Fine Gael has no expressed policy on the issue, although it seems there has also been movement in favour within its parliamentary party. All of this is likely to be reflected today when the constitutional convention considers the question of whether it should propose a constitutional amendment.

The single most important intervention in the debate on the issue of same-sex marriage in Ireland in recent times, however, was that of Mary McAleese last October.

In her first substantial interview after her term as president finished, she told Gay Byrne she was “not troubled by the idea of gay marriage” and spoke eloquently about the discrimination homosexuals had experienced for centuries.

Mary McAleese is no liberal icon and her remarks would have had a particular impact on those who might have been resistant to or disinterested on the issue.

The opinion polls are going the way of constitutional change on same-sex marriage but, given the experience with previous divorce referendums and other social changes, they must come with a health warning. As the debate intensifies there is the possibility the polls will shift again.

It’s the shift in the underlying context of the debate that is more important, however. The constitutional entitlement to same-sex marriage is increasingly seen as something that matters as an acknowledgment of equality to lesbian and gay people and which, notwithstanding the attempts of opponents to scaremonger on the point, costs the rest of us little. This shifting political context is something to which the constitutional convention should have regard.

1 Lithuanian man given until midnight on Saturday to leave Ireland
2 Ryanair’s Michael O’Leary under fire for comments on Muslim men
3 Coronavirus in Europe: Two dead in Italy as fears grow that attempts to contain illness are failing
4 Archbishop: Sex abuse of women by L’Arche founder ‘reprehensible’
5 The view from Clondalkin: If Sinn Féin don’t get in, ‘there will be marches’
Real news has value SUBSCRIBE