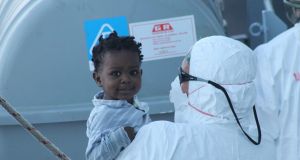 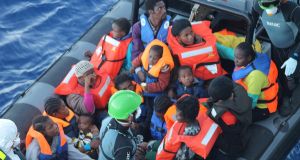 The Greek coastguard has rescued 242 people off the eastern island of Lesbos after the wooden boat they travelled in capsized, leaving at least three people dead.

Rescuers continue to search the rough waters for more survivors and the coastguard said it remains unclear how many people were on the boat when it went under.

The International Organisation for Migration said some sources told it 200 people were on board the boat, while others had told it 300.

The accident raised the total death toll from five separate incidents in the eastern Aegean Sea to 11, as thousands of people continued to head to the Greek islands in frail boats from Turkey in stormy weather.

Greece is the main entry point for people from the Middle East and Africa seeking a better future in Europe. Well over half a million have arrived so far this year.

In a separate incident, a seven-year-old boy died off Lesbos while a 12-month-old girl was in a critical condition in hospital from the same boat accident.

Another three children and a man died off the coast of Samos, while one woman and two children drowned off the islet of Agathonissi.

Earlier, the Irish vessel LÉ Samuel Beckett rescued 218 people from rubber boats off the coast of Libya on Wednesday morning.

The vessel took 63 women, including one pregnant woman, six children and 149 men on board during two consecutive humanitarian rescue missions.

The Irish Defence Forces ship spotted the first 12-metre craft during a search and rescue patrol 64km north-west of Tripoli. There were 85 people on board.

Those rescued were given food, water and medical attention where required.

The ship, which has rescued a total of 565 people since it was deployed in the Mediterranean this month, is continuing to patrol the sea.

The vessel is under the command of Lieut Cdr Anthony Geraghty and took over its duties when LÉ Niamh left the region in early October.

LÉ Eithne and LÉ Niamh rescued a total of 7,397 men, women and children during their respective missions.

Brian Killoran, chief executive of the Immigrant Council of Ireland, said the number of people Irish Naval ships have rescued should be “source of national pride”.

“The naval mission is up for further review in December, given the numbers taking to the high seas has not fallen off we are asking the Government to keep the deployment under review - and if necessary extend it into 2016,” he said.