Thousands turn out in Dublin to support refugees

Protesters call for greater action as commitment to 4,000 is ‘nowhere near enough’

The demonstration organised by United Against Racism took place at the Spire on O'Connell Street as they marched down to the Central Bank. Organisers estimate 2,000 people turned up to the rally. 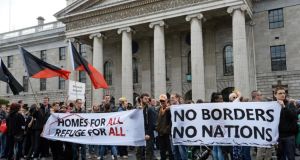 People taking part in the rally organised by United Against Racism, calling on the government to take in more refugees, on O’Connell Street, Dublin. Photograph: Eric Luke/The Irish Times 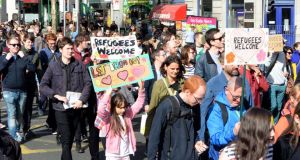 The image of drowned three-year-old Aylan Kurdi, by now an indelible symbol of the refugee crisis in Europe, was once again invoked as thousands turned out to a rally in Dublin demanding a greater humanitarian response.

His name filled the lips of protesters and their placards. While Ireland has committed €48 million to take in 4,000 people fleeing the conflict, it is the boy washed up on the Turkish beach that the general public first talk about when considering the response.

“That little boy stirred everything. It was absolutely desperate. It’s something that I think is worth standing up for,” said Kathleen Bennett from Co Kildare, who was on O’Connell Street with her daughter Mary for Saturday’s demonstration.

With no official crowd estimate available, organisers said it passed the 2,000 mark, winding its way from the Spire to the Central Bank.

As the European Commission begins its analysis of the economic and budgetary impact of the crisis on member states, many ordinary people represented by marches such as this, are demanding faster, broader action with less focus on the consequences for European countries.

“The point of today is to raise the bar in terms of the popular sentiment happening in Europe at the moment in support of refugees,” said organiser Memet Uludag.

“It’s not going to go away. It’s been growing here since 2011, not just two weeks ago when we saw the pictures of the body of Aylan on the beach.”

Mr Uludag, in keeping with the views of many in attendance on Saturday, believes Ireland’s willingness to accept 4,000 refugees to be insufficient. “Nowhere near enough,” he said. “What are we going to tell the 4,001st child?”

There was some tension and a minor flashpoint at the rally when a number of Syrian refugees took exception to a fellow-national who they said was a supporter of Bashar al-Assad, the Syrian president. Gardaí intervened although no serious incident occurred.

As well as Syrians, a number of Irish political figures from the left addressed the crowd, although their determination to mix the message with domestic issues such as water charges and austerity did not always go down well. The focus here was keenly on those fleeing a war-ravaged Syria.

“I would like to call on the international Security Council, the five permanent members to stop playing politics [with] humans, to agree upon a unified decision.

“It’s not politics; it’s a matter of human life. We are humans. We are sharing the same sky.”

Independent TD Clare Daly also warned of the “growing undercurrent of racism that says we have to look after our own first”. How that manifests itself, in issues such as housing shortages, is a separate matter to be dealt with, she said.

A number of Syrians wanted to address the confusion of refugees and economic migrants.

Dr Kamal Hajar, who has lived in Ireland for about 20 years, said the current wave of people fleeing the region do not wish to settle in Europe.

“Syrian people, they don’t like to leave the country,” he said. “Syria is a beautiful country, a rich country. I have invited family to come here over the years and nobody wanted to come.”

Sali Abouhajar (20) was born in Ireland but her family originally comes from Syria.

“The only reason people are fleeing is because people are being killed. People will go back even if they have no houses left. They just want somewhere safe to go [in the meantime],” she said.

Today, that wish often means a hazardous journey. Ayman (26), resettled in Ireland from Lebanon with his wife and son a year ago, but he says his brother had to flee the regime across the Mediterranean and is now in France.

“He called me and said, look I am safe now . . . and he hopes to bring his wife and daughter from Turkey. He couldn’t bring them with him [across the Mediterranean] to their [potential] death,” he said.

Amnesty International’s Colm O’Gorman said there was a legal obligation on EU member states including Ireland to offer a safe haven.

“Last week the world was horrified by the image of three-year-old Aylan Kurdi drowned on a beach in Turkey,” he said.