The Corrib legacy: what the protests achieved

A rerouting of the pipeline and greater public awareness of how Ireland treats its natural resources were among the positive outcomes of the Shell to Sea, campaigners say 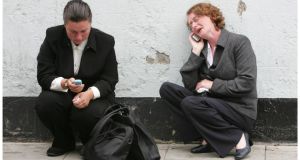 Bríd McGarry, a Mayo landowner, and Mary Corduff, wife of jailed farmer Willie Corduff, after five Mayo farmers were jailed in 2005 for refusing to give an undertaking not to obstruct the construction of the Corrib gas pipe line. Photograph: Alan Betson/The Irish Times

“You’ve gone very quiet up there.” North Mayo resident Mary Corduff reckons that if she had a euro for every time she heard this remark over the past few months, her purse could be pretty full. “People think because they don’t see us on protesting on the television that we have accepted this, but we haven’t,” Corduff says, looking out of her farmhouse window towards the Corrib gas refinery several miles away.

Last month she was one of 64 people who submitted an objection to the Environmental Protection Agency over a revised emissions licence for the Corrib gas project. The licence is one of the last pieces of authorisation for the project and without it, gas cannot flow . . . but after 15 years of opposition to Corrib on health and safety grounds, Corduff is not holding her breath.

Ten years ago, Irish Times photographer Alan Betson’s photo (above) of Mary Corduff’s distraught figure, crouched on a pavement outside the High Court in Dublin with neighbour Bríd McGarry, captured the impact of the project back then.

Her husband, farmer Willie Corduff, and four fellow opponents involved in local protests, were sentenced to indefinite imprisonment for defying a court order against them secured by Shell.

The jailing of the five men proved to be a public relations disaster for the multinational, which had acquired the gas field off Mayo when it purchased Enterprise Oil in 2002.

As part of that acquisition, it also inherited the fallout from hasty Fianna Fáil support for plans to construct an an onshore refinery for the gas in a forest and on a bog, in spite of an adverse recommendation by a Bord Pleanála inspector.

The men’s imprisonment in 2005, which spawned the campaign known as Shell to Sea, caught the public’s imagination. One of the campaign’s first successes was a safety review of the onshore pipeline, and its revision.

A modified route submitted to Bord Pleanála under strategic infrastructure legislation was turned down, as up to half of it was deemed to be “unacceptable” on safety grounds.

The final route, approved through the longest tunnel of its type in Europe, runs between the villages of Glengad, Pollathomas and Rossport under Sruwaddacon estuary, a special area of conservation.

Over the past decade, opponents of the project living in the Erris parish of Kilcommon have put in thousands of hours of voluntary work to prepare for four protracted oral hearings. They participated in many early-morning protests marked by altercations with gardaí. They spent hours, days and weeks in court hearings, as did young campaigners from the Rossport Solidarity Camp.

“The tenacity of Shell to Sea – 15 years and counting,” is one of several positive points identified by former school principal Maura Harrington. She also singles out “the highlighting of the ‘Great Gas Giveaway’ of offshore resources against all the odds – as in media disinterest and Government/corporate spin”.

Dissent took a heavy toll. Fisherman Pat O’Donnell, who had commissioned a report from a Southampton University scientist in 2000 warning of the impact of refinery discharges on the marine environment, refused to accept compensation offered by Shell during installation of the offshore pipe.

He lost a boat in unexplained circumstances, and spent seven months in jail for a protest-related public order offence. However, his stance influenced the Erris Inshore Fishermen’s Association, which lobbied for an agreement to ensure that contaminants from the refinery would be pumped back out to the wellhead, rather than being discharged off Erris Head.

When fishermen recently reported that a discharge pipe laid along the pipeline route had surfaced after storms, however, it revived local concerns. The Environmental Protection Agency opted not to send an inspector.

It was due to similar community vigilance, rather than that of the State, that breaches by the developers during construction prompted ministerial intervention in 2005 and 2007.

In September 2013, a German hydraulics specialist Lars Wagner (26) died of head injuries after a valve reportedly burst on the tunnel-boring machine in Sruwaddacon estuary. “I often think of that young man’s death,” former Bord Gáis engineer Leo Corcoran says. Corcoran represented the local community in oral hearings and worked with local priests on proposing an alternative location for the gas refinery, which was turned down by Shell.

“The risk to staff like him was one reason I did not agree with Shell to Sea’s call for the refinery to be built offshore,” he says.

Corcoran remains concerned about various aspects of the project. “At the same time, this project should never have been built so close to a public drinking water supply, as in Carrowmore lake,” Corcoran says. “If the developers had evaluated their location in accordance with codes of practice, they would have saved themselves a lot of money, would not have annoyed a local community, and would have brought gas ashore five years ago.”

Corcoran identifies a landvalve constructed at Glengad beach to reduce pressure in the pipeline as the gas comes in from sea as the most vulnerable part of the project. Colm and Gabrielle Henry, who live just above the valve in Glengad village, say they feel “more ill at ease than ever” after witnessing the EPA’s “response” to the surfacing of the discharge pipe.

Colm Henry attended the 2009 Bord Pleanála hearing into the modified pipeline route, which heard a submission that Lloyd’s Intelligence Unit had recorded 1,200 deaths in 58 countries due to pipeline failures between 1998 and 2008. “We are living in what they call the kill zone for this project,” Henry says.

Shell says that all of the Corrib gas facilities are subject to “independent third-party verification” and the development is regulated by several government agencies. It has written to residents inviting them to submit contact details for “potential incident scenarios”. Residents who do not respond will be “notified through local media”, it says.

Mayo County Council says two fire officers are on 24-hour call in Mayo. The nearest fire brigade is part-time and is 30km in Belmullet. It has published an emergency plan.

Shell says that it received a safety permit for Corrib from the Commission for Energy Regulation in October 2014. The commission was tasked with establishing a petroleum safety framework under legislation initiated by former energy minister Eamon Ryan.

However, Micheál Ó Seighin says that this legislation effectively erased a minimal legal protection of “consequence” and allowed for “tolerable risk”, in the context of “best available technology”.

The project is “now more dangerous than originally planned”, in his view, as “the developer is now well aware of the length to which the State and its regulatory authorities will go to protect it”.