Symphysiotomy survivors ask for records to be returned 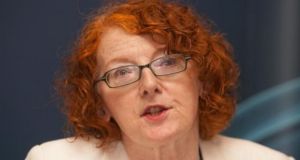 Chairwoman of Survivors of Symphysiotomy Marie O’Connor said she would contact the Data Protection Commissioner on Friday about the proposed destruction of the records. Photography: Gareth Chaney/Collins

Survivors of symphysiotomy have appealed to the State’s redress scheme to reconsider its intention to destroy their medical and other records.

The scheme, headed by former High Court judge Maureen Harding Clark, recently announced an intention on its website to destroy all the applicants’ records unless it was informed by Monday, February 29th that they wished to have them returned.

On Friday afternoon, however, the scheme said applicants would be written to and given until March 20th to decide what they wish to happen to their records.

The independent redress body was established by the Government in 2014 to compensate women who underwent symphysiotomies. The procedure involved cutting the pelvic bone to create more space during childbirth. Many of the operations took place up to 50 years ago, often without the women being aware of what had been done to them.

They ended up with many health and psychological effects, included impaired walking, chronic pain and incontinence.

Chairwoman of Survivors of Symphysiotomy Marie O’Connor said the group had asked the Data Protection Commissioner to intervene, as it had been unable to reach agreement with the redress scheme in relation to the proposed destruction of the records.

“These personal data were entrusted to the scheme on the understanding that they would be returned when the scheme had completed its work,” she said.

She appealed to the assessor to return the records by post, as it had previously undertaken to do, instead of destroying them.

Ms O’Connor said the scheme had placed a lot of emphasis on radiological records and a large number of X-rays had been supplied.

It was possible there were women who were completely unaware of the scheme’s intention to destroy the records and that there were some who did not have copies.

“For the scheme to assume consent, when that’s exactly what doctors did 50 years ago, well we have great difficulty with that.”

Under the scheme’s terms of reference, applicants may not subsequently sue the State, any state agency, hospital, doctor, obstetrician or any religious order.

A spokeswoman for the Department of Health on behalf of the scheme said only copy medical records had ever been received.

The originals remained with hospitals or possibly with a solicitor.

“In the circumstances, any applicant’s mind can be put at rest that her medical records can not be lost by any action of the scheme.”

The spokeswoman said the scheme administrators had recently begun writing to applicants asking if they would like their application form and supporting documents returned, at no cost to them.

“If applicants wish to have the documents destroyed rather than returned, the scheme will be happy to facilitate this.”

It said applicants now had until March 20th to decide how they would like the scheme to act. The Data Protection Commissioner was aware of this correspondence and was “satisfied for the scheme to proceed in this manner”.

She said the confidentiality and protection of applicants had always been the top priority of Ms Clark.