State pension ‘not enough to survive on’, meeting hears 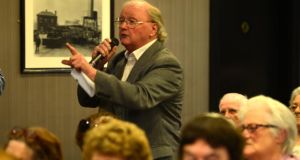 Many older people are struggling to afford to heat their homes and pay for medical care, a public meeting in Dublin has heard.

“It was quite an angry meeting at times,” Age Action spokesman Eamon Timmins said.

“There were a lot of questions about income, whether the State pension was adequate. Many were saying it wasn’t enough for them to survive on.”

Long waiting lists for nursing home places under the Fair Deal scheme “raises the question of whether the systems currently set up are meeting the real needs of sick and frail older people”, Mr Timmins said.

The cost of fuel is also a key concern, with many telling today’s meeting that they are struggling to afford to heat their homes, especially if living alone.

Age Action is calling for the Living Alone Allowance to be raised by €3.80 to €11.50 per week in the upcoming Budget. The payment has not been increased since 1996.

They are also asking for a €5 increase in the State pension, which has been frozen since 2009, the restoration of the Christmas bonus, abolished in the same year, and the reversal of reductions to the fuel allowance.

Mr Timmins said many of the people who attended the meeting expressed concern about how they were going to be able to afford the new water charges when the first bill arrives early next year.

“It is the latest in a long list of things that people are worried about... People are really struggling. People are angry, and there is a lot of anxiety,” he said.

“We know there isn’t a lot of extra money around, even if the country’s finances are picking up. But we can’t go around the country hearing from people who are having to make decisions, which we believe are unacceptable, between paying for fuel or medication. We can’t hear those stories without asking for an increase in payments to support these.”