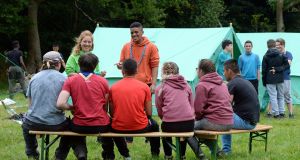 They have heard the stories of conflict and seen the images of unrest on TV. But on a campsite in the Dublin mountains yesterday, a group of Dublin teenagers came face-to-face with some of the young people at the centre of Europe’s refugee crisis.

About 20 children seeking asylum in Ireland, who recently arrived in the country without their parents, were there to take part in an special Scouting Ireland access programme.

The aim is simple: to connect vulnerable teens on the margins of society with Irish teenagers through camping, cooking or just hanging out.

In the process, despite language and cultural barriers, the teenagers realised they have a lot more in common than they might have thought.

“We were chatting about UFC and Conor McGregor earlier,” says Liam (17), a venture scout based in Phibsborough.

“Then we’re chatting about camping and it turns out the other young asylum-seeker had been camping for months in Calais. ”

“I wasn’t even aware that we had refugees in Ireland,” says Muireann (16), a venture scout from Donore Avenue.

“I had seen these issues on the news, but that was about it.”

The asylum-seeking teenagers, who cannot be identified for child protection reasons, are from countries including Afghanistan, Iraq, Pakistan and Syria and have typically been in Ireland for just a couple of months.

The new arrivals are initially placed in temporary accommodation in Dublin before being allocated a foster family from across the country.

As the refugee crisis continues to escalate in Europe, the number of separated children arriving into Ireland is slowly climbing - almost 110 sought asylum in 2014 - though numbers are well below the peak reach of about 1,000 reached in 2001.

In a world where much of their interaction is with adult officials, the Scouting Ireland programme means young asylum-seekers have a chance to mix with other teenagers.

“There’s nothing high-tech here: it’s camping, hanging out and learning together,” says John Lawlor, the chief executive of Scouting Ireland.

The programme may be simple - but it could also be a model for other countries grappling with the challenge of integrating young refugees into society.

The scouting movement in the UK is hoping to adopt the programme, while US researchers are also interested and examining its impact.

The City of Dublin Education and Training Board - which supports the project - is said to be a big fan of its emphasis on “informal education”.

The programme is also challenging stereotypes - not least of Irish teenagers, so often labelled in the media as self-obsessed millennials.

“We see our kids in international settings, like jamborees and other events. You know what? I wouldn’t trade them for any other nationality,” says Mr Lawlor.

“They’re talented, gregarious, friendly… they also have a deep sense of right and wrong.

“They’re happy to help other kids who may be detached from their community and afraid. They see it as worthwhile. Young people are showing us the way here.”