Safety of children in direct provision flagged by report

Significant number of children exposed to violence, physical abuse and risk of injury 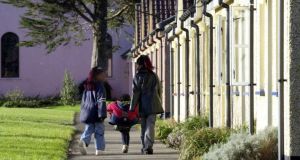 In one case in the Louth-Meath area, it took three years for social workers to respond to concerns about a child threatening suicide. Photograph: The Irish Times

Fears for the safety of many children of asylum-seekers living in direct provision have been flagged in an official report to be published shortly.

Child protection and welfare concerns were raised about approximately one in seven of 1,600 children living in direct provision in the year up to last August, according to a report by the standards body Hiqa, the Health Information and Quality Authority.

This represents 14 per cent of the children living in the asylum-seeker system. The comparable figure for welfare referrals in the child population generally is 1.6 per cent.

Concerns about children may be raised with the authorities by anyone, but professional staff have a duty to report them under the Children First guidelines.

It is understood the report will say that in the case of a small number of children, “action was not taken to protect them”. It praises the work of many practitioners striving to meet the welfare and protection needs of children in direct provision, but says this is not consistent across all areas.

“There was no strategic plan in place to identify and meet the needs of this particularly vulnerable group of children and families.”

A significant number of children living under direct provision were exposed to domestic violence, physical abuse, inappropriate contact with adults, violence between residents and risk of injury, according to the report.

Physical or mental illness of parents impacting on their capacity to care for their children, children’s mental health issues, and gaps in the provision of practical support were common welfare concerns.

It is understood Hiqa inspectors found living in direct provision accommodation “was a cause of some of the welfare concerns” , including injuries sustained by children due to cramped living conditions.

Hiqa last year decided to monitor the quality of services provided by the Child and Family Agency (Tusla) against specific national standards for the protection and welfare of children.

Nationally, Tusla received 41,599 referrals about children in 2013, of which half reached the threshold for an initial assessment by social workers.

But of 209 referrals made to the agency about 229 children in direct provision, 178 (85 per cent) reached the threshold for an initial assessment – significantly higher than the national figure. The Hiqa report says further analysis is required to determine the reasons for this disparity.

Some social workers interviewed by Hiqa expressed concerns about the isolation of families, due to the location of their accommodation away from towns and transport routes and their location within direct provision centres.

Teams in some cases also felt families were not coming forward for support, as they were worried they might be perceived as being poor parents and this might have an impact on their application for asylum.

More than 4,300 asylum seekers, including 1,600 children, have spent an average of four years in direct provision.