‘Restrictive’ abortion laws to be questioned by UN members 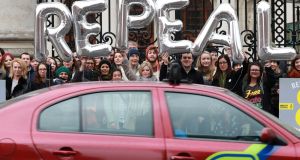 A demonstration outside Government Buildings in April seeking the repeal of the Eighth Amendment. File photograph: Nick Bradshaw

The Government will face questions from other UN member states in Geneva next week on its plans to deal with the State’s “restrictive” abortion regime.

Advance questions to be asked of the incoming Government as part of a periodic review of its human rights record were published on Tuesday by the office of the UN High Commissioner for Human Rights.

Six of the nine countries that submitted questions asked about the State’s abortion laws and what plans the Government has to bring the law into line with international human rights standards.

Sweden asked what measures the State is prepared to take “to bring its legislation and medical practices in line at least with minimum international standards of sexual and reproductive health and rights and to allow abortion in the most serious cases such as rape, incest, fatal foetal abnormality and serious risks to the health of the mother”.

The Netherlands asked what steps the Government envisages to examine “the restrictive abortion regime in Irish law”.

It also asked whether the Government envisages establishing “an expert group on abortion matters which can contribute to a coherent legal framework including the provision of adequate services”.

Germany’s questions include whether the Government will consider a review of Article 40.3.3 of the Constitution, “in which the biological existence of a foetus is put on an equal basis with the right to life of a pregnant woman”.

Homelessness also features in Germany’s questions. It asked what measures are proposed to meet “the critical needs of homeless people and those who are at great risk of becoming homeless”.

Germany, Sweden and the UK also asked what plans the State has to ratify the UN Convention on the Rights of Persons with Disabilities.

Slovenia’s questions ask what plans there are, in light of previous recommendations by the Committee on Economic, Social and Cultural Rights, to both overcome gender stereotypes and increase women’s representation in decision-making positions.

The Czech Republic wants to know what specific measures the Government adopted and plans to adopt in order to eliminate the marginalisation of and discrimination against Travellers.

The Irish Council for Civil Liberties said the new Government would face the “first serious international test of its leadership” when the incoming Minister for Justice would be expected to give answers to these and other issues.

The Government will be questioned as part of the so-called Universal Periodic Review process before the UN Human Rights Council.

It is the second such periodic examination of the State’s human rights record.

Under the peer-to-peer review process, each of the 192 member states of the UN voluntarily submit themselves for a review every 4½ years.

The State will be given the opportunity to outline the progress it has made on implementing recommendations from its first review in 2011.