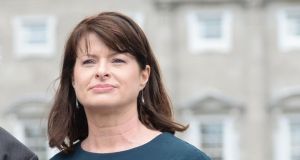 Emily Logan, chief commissioner of the Irish Human Rights and Equality Commission: she said the commission “remains concerned that the current legal position in relation to abortion puts in place barriers which impede a woman’s right to bodily autonomy.” Photograph: Dara Mac Dónaill / The Irish Times

The Government’s rejection of 16 recommendations from the United Nations on women’s reproductive rights was raised at a session of the UN’s Human Rights Council on Friday.

Last May the Geneva-based committee adopted the “outcome report” of its universal periodic review (UPR) of Ireland’s compliance with the UN Convention on Human Rights. Ten speakers, representing Irish and international human rights organisations, spoke at the event.

Some 262 recommendations were made to Ireland by other member states on issues including prison conditions, the direct provision system, the rights of people with disabilities and access to schools for children from faiths other than Christian. The Government accepted 176, partially accepted 46, but did not support 40.

Emily Logan, chief commissioner with the Irish Human Rights and Equality Commission, said the commission “remains concerned that the current legal position in relation to abortion puts in place barriers which impede a woman’s right to bodily autonomy and has a disproportionate negative impact particularly on women from lower socioeconomic backgrounds and women who are seeking asylum or migrant women.”

She added: “We regret that the important issue of Traveller ethnicity has not been progressed since Ireland’s first periodic review in 2011.”

Murat Adali, of the Council of Europe, said monitoring bodies were concerned about the “discrimination against vulnerable groups like people with disabilities and children who are at risk of falling victim to austerity measures.” He voiced concern about “difficulties” faced by the Traveller community and “poor prison conditions”

Meghan Doherty, of Action Canada for Population and Development, said organisations for which she was speaking – including the Abortion Rights Campaign and the Sex Workers Alliance Ireland, were, “deeply concerned” on this.

Thomas Jagels of the Alliance Defending Freedom said “there is no recognised international human right to abortion,” adding abortion laws should be “decided on the domestic level”.

John Mullan of Edmund Rice International raised concerns about the 14 per cent of children leaving school and called for a “legislative holistic response to marginalised young people” .

The Irish Ambassador in Geneva, Patricia O’Brien, said the Government was “fully committed to the UPR process”.