Rents higher than at peak in boom with 9.8% rise nationally

Dublin rents last year up 9.5% for houses and 8.7% for apartments

Archive Video: Less construction, greater internal migration and a pickup in the economy are some of the factors leading to a housing crisis characterised by a severe shortage of accommodation combined with rising rentals and house prices. 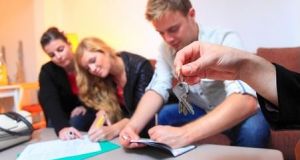 Nationally, rents increased by 9.8 per cent last year, slowing between the third quarter, when the increase was 3.6 per cent, and the fourth, when it was 2.2 per cent. File photograph: Getty Images

Rents in Dublin are now higher than they were at the peak of the boom - but the rate at which they are increasing is slowing, according to the latest quarterly figures from the Private Residential Tenancies Board (PRTB).

Nationally, rents increased by 9.8 per cent last year, slowing between the third quarter, when the increase was 3.6 per cent, and the fourth, when it was 2.2 per cent.

Rents in Dublin increased by 9 per cent last year – with the sums paid for houses up 9.5 per cent and apartments up 8.7 per cent.

The report shows rents outside Dublin are still almost 15 per cent below their 2007 peak.

Outside Dublin at the end of last year, houses were averaging €728 per month and apartments €696, compared with €664 and €629 respectively a year earlier.

Simon Communities Ireland, meanwhile, reiterated its call for a full minister for housing.