Warm welcome in Cuba for news of visit by Pope Francis 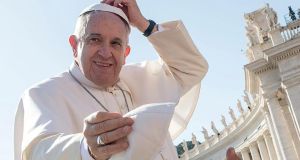 Pope Francis’s September visit to Cuba will precede his journey to Washington, New York and Philadelphia for the World Meeting of Families. Photograph: Getty Images

Cuba’s foreign minister has welcomed the Vatican announcement that Pope Francis is to visit the country en route to the US in September.

Vatican spokesman Fr Federico Lombardi confirmed on Wednesday “that the Holy Father Francis, having received and accepted the invitation from the civil authorities and bishops of Cuba, has decided to pay a visit to the island before his arrival in the United States for the trip announced some time ago.”

Cuban foreign minister Bruno Rodriguez said “the presence of His Holiness in Cuba will be memorable. He will receive the warmest hospitality of the Cuban people”.

In his statement Fr Lombardi noted that “the visit to Cuba is especially significant in light of the role played by Pope Francis in diplomatic negotiations between the United States and Cuba. Leaders from both nations have publicly thanked Pope Francis for his aid in negotiations.”

It continued that Pope Francis wold be be the third Pope to visit Cuba. In 1998, Pope St John Paul II made the first papal visit there, when he met Cuban leader Fidel Castro. In 2012 Pope Benedict also visited.

Pope Francis’s September visit to Cuba will precede his journey to Washington, New York and Philadelphia for the World Meeting of Families.

A predominantly Catholic country before the 1959 revolution which brought Jesuit-educated Fidel Castor to power, Cuba has been a focal point for Vatican diplomacy ever since despite restrictions placed on church activities.

The Vatican’s opposition to the US embargo on Cuba over the decades, particularly as articulated by Pope St John Paul during his 1998 visit, gave it credibility in Havana when it came to acting as a diplomatic broker with the US, with which Rome has had good relations down the decades.

When US president Barack Obama visited Pope Francis last year they discussed Cuba. The Pope later wrote personal letters to the president and Cuba’s president Raul Castro urging them to “initiate a new phase” in relations.

Pope Francis has long had a personal interest in Cuba. After Pope St John Paul visited there in 1998, then Archbishop of Buenos Aires, he wrote the book Dialogues between John Paul and Fidel Castro. He visited Cuba himself when Pope Benedict was there in 2012.

He is due in Washington on September 22nd where he will address both Houses of Congress, the first Pope ever to do so.