Not enough to have economic profitability, ‘essential to promote the common good’ 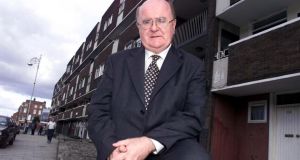 Fr Seán Healy: “It is not enough for economic activity to be profitable, it is also essential that it promote the common good.” Photograph: Mark Maxwell

Commitment to the European social model “is essential if the wellbeing of this and future generations is to be secured,” Dr Seán Healy director of Social Justice Ireland said yesterday.

Speaking at the launch of its policy briefing Elections 2014, he reminded people “the EU is both a social and an economic project” and “in these economically turbulent times it is essential to focus on the shape of society we wish to see emerge. It is not enough for economic activity to be profitable, it is also essential that it promote the common good.”

Michelle Murphy, research and policy analyst at Social Justice Ireland, said that “action is needed in the areas of social inclusion, the economy, the democratic deficit and sustainability if we are to see the emergence of a just society in Ireland and across the EU.”

Both Ireland and the EU were “moving in the wrong direction,” she said.

“ These elections are a key moment to change direction at local and European level in terms of shaping the future. If we want to reverse the negative trends in relation to employment, poverty and social inclusion then immediate action is required. The wellbeing of this and future generations will be built by decisions made in the years ahead,” she said.

Elections 2014 says that “given the growing inequality and social exclusion being experienced by so many across the EU and in Ireland, it is crucial that political leaders take action to reduce poverty and income inequality, combat unemployment and secure services and infrastructure.”

On the economy, it called for action to ensure corporations paid a fair share of tax including through a Financial Transactions Tax, to increase investment and to ensure “the financial sector can never again repeat the crash of 2008.”

It also said “at a local level, the newly-elected Councils should put wellbeing at the core of their new plans and at an EU level development of ‘satellite’ or ‘shadow’ national accounts should be a central initiative of the new Parliament and Commission.”