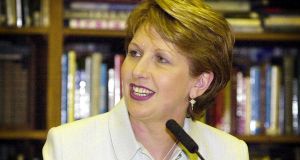 Mary McAleese: “Since it was instituted by Pope Paul VI the synod has never been a ‘dynamic’ body, according to Pope Francis himself, and this one was no different.” File photograph: David Sleator/The Irish Times

The recently concluded synod of bishops in Rome has come up with nothing new or interesting, former president of Ireland Mary McAleese has said. The Synod on the Family, comprised of Catholic bishops from around the world, met for two weeks in October last year and for a further three weeks this month. It formally concluded with Mass in St Peter’s Basilica last Sunday.

“Since it was instituted by Pope Paul VI the synod has never been a ‘dynamic’ body, according to Pope Francis himself, and this one was no different,” Ms McAleese told The Irish Times.

“The Synod on the Family – despite highly misleading reports to the contrary regarding nonexistent changes to sacramental access for divorced and remarried Catholics – has, after two years of deliberations and consultations, come up with nothing that is pastorally fresh or even interesting.”

She continued: “It is, worryingly, however, the first synod to challenge the will of a pope and so much more important than the synod’s report will be the holy father’s eventual written response to it. Whether that is to be a climbdown or a showdown remains to be seen but his closing address indicated a surprisingly frank level of frustration with the lack of progress. Little wonder, for after so much expensive and extensive effort all that the synod produced is an embarrassingly large carbon footprint leading backwards.”

The synod’s 66-page, 94-paragraph final report was published last Saturday, each paragraph having secured the necessary two-thirds, 177-vote majority. Its conclusions meant nothing new where women or gay people were concerned.

Three paragraphs dealing with access to communion for divorced and remarried Catholics were closely contested, receiving 187, 178, and 190 votes. None mentioned the words “communion” or “eucharist”.

Paragraph 85, which spoke of dealing with each situation on a case-by-case basis, received the barest majority of one vote, at 178. Already it has been subjected to different interpretations.

Sydney Cardinal George Pell said the ban on Communion for civilly remarried Catholics was “implicit, really present in the document, but not spelled out as much as some of the fathers would like.” However, Cardinal Christoph Schonborn of Vienna said it was not a blanket “yes or no” to communion for divorced and remarried Catholics.