Spences' sense of grief and loss balanced with gratitude 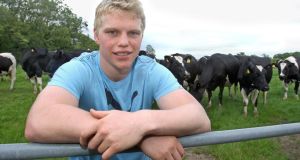 He was all that we want our sporting heroes to be. Nevin Spence was a talented centre with the Ulster rugby team. At just 22 years of age he was on the cusp of making the Irish team. The rugby world was his oyster. But on September 15th, 2012, tragedy struck and he lost his life.

In the worst farming accident in more than 20 years in Northern Ireland, Nevin was taken from his family in an attempt to rescue a beloved dog after it had fallen into a slurry tank on the family farm in Hillsborough, Co Down.

His father, Noel (58), and his brother, Graham (30), also died in the rescue attempts at the tank. Nevin’s sister Emma also courageously put her life on the line in an effort to rescue her father and brothers before being overcome temporarily by the poisonous fumes.

She paid an emotional tribute to the three men: “Dad was the one you probably saw taking up half the Drumlough Road with the tractor. He is the one that greeted you with a thump on the arm. He is the one who christened you with a new nickname no matter who you were.

“To me he was the one sitting at the kitchen table with his coffee made in only mum’s best china cup listening to my every worry and telling me the truth whether I wanted to hear it or not.”.

Graham was “driven by the thought of improving farming” and was “unashamedly Nevin’s biggest fan . . . a gentle giant who doted on his two children. He is the one who came alive when he talked about farming.

“To me he is the one who protected me as I grew up. To me he is looking at me when I look at Nathan and I look at Georgia. ”

She summed all three up: “They were hard-working men. They were not perfect but they were genuine. They were best friends. They were godly men – they didn’t talk about God, they just did God. They were just ordinary – but God made them extraordinary.”

The impression on meeting Emma and her sister Laura is of a shaft of light illuminating the darkness of a family tragedy – two noble natures standing up for people they love. Preserving cherished images remain important for those who see it at first hand. Their testimonies of faith, strike not so much a note of hope as a symphony.

The memory of magical childhood moments with her father and brothers will linger in Emma’s mind for life, and of those who grew up with her, leaving a warm afterglow to light up numerous conversations for years to come.

“He was humble,” she said. “Often I was congratulated Nevin on his achievements and, sometimes to hide my confusion, I accepted praise for him, then headed home to ask at the dinner table, ‘So, Nev, I didn’t get the paper today, what have you done?’ The answer would be ‘Nothing. I don’t know.’ Only to find he had been selected to train in the Ireland camp, or won young player of the year. Nevin didn’t see these things as important. Instead he reflected what Mother Teresa said: ‘Be faithful in small things because it is in them your strength lies.’”

Nevin will always live on in Emma’s heart. “As my mum put it when he was alive, and has repeated even more often in the past two years: ‘Nevin was special.’ Maybe what was even more special was the chance to encounter him in your life.”

Whoever said time heals all wounds has not met the Spence family.

Yet, two years on, Emma’s sadness at what she has lost is balanced to some extent by her gratitude for what she had.

“Nevin’s masseur used a verse from the Bible to sum him up. Colossians 3:23 says: ‘Whatever you do, work at it with all your heart, as working for the Lord, not for human masters.’ Nevin’s commitment to his faith was reflected in his life. This was the core of Nevin’s life, which mirrored the person he was,” she said.

“He has left a lasting impression on those who knew him. I have heard it said Nevin, along with his brother and father, have spoken more in death than in life.”

Dr John Scally lectures on theology and ethics in the Department of Religions and Theology at Trinity College, Dublin. His authorised biography of the late Defence Forces chief of staff Dermot Earley, Earley: an Officer and a Gentleman, will be launched by Taoiseach Enda Kenny at Croke Park this evening.