Sisters who ran Magdalene laundries are being treated unjustly

Opinion: Media has failed to be balanced in its reporting 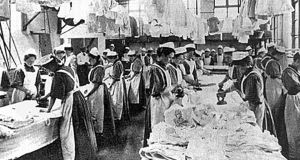 To understand happenings of the past and why situations unfold in the manner they do requires an unbiased knowledge of history. Seeking accuracy necessitates taking into account the views of the various parties involved.

Both before and after the McAleese report, the views of the Magdalene women have rightly been given, but almost nothing is noted from the sisters’ perspective. Recent history gives a clue as to why.

Reporting on the industrial schools’ sad situation was from the start one-sided and largely hostile towards religious sisters. This made it then, and now, almost impossible for sisters to speak publicly, knowing they are likely to be prejudged. The media has failed to offer balanced reporting on the orphanage and the Magdalene situations.

While deeply saddened by what children and the “Magdalene women” had to suffer, I am also saddened at the stressful situation the sisters of the four congregations (who managed the laundries) are going through. Many are old, after a life in the service of others, and are left carrying this “shadow” placed on them.

An editorial in The Irish Times (July 18th, 2013) used stern words about the sisters making a “grave miscalculation” in regard to not paying half of the compensation package offered by the State, and reprimanding them because of their “ethical and moral responsibility” to do so.

Should sisters solely be made responsible when families and other members of the public were the cause of the plight of many of these women? Where are the sisters to get this money? Few sisters are in salaried work.


Not many pensions
Those young enough are in ministries such as school or hospital chaplaincies, in parishes or working with immigrants. These ministries, if remunerated at all, are of a stipendiary nature. The majority are on the basic old-age pension, with only the sisters in education getting teachers’ pensions.

Sisters working in healthcare and most in pastoral/social care situations, including those sisters who worked in the laundries, never received salaries. Congregations still help with funding their charitable works.

And what assets one wonders? Many properties are in charitable trusts or are being used in vital public care as hospitals, hospices, schools etc. These are not money-making ventures ( like the laundries). I have no knowledge of the wealth of any of these congregations but I would imagine there is not that much left after the care of older sisters is provided for.

I do, however, have knowledge of living as a sister for 25 years (1954-1979) in the Religious Sisters of Charity. The buildings we lived in were adequate but never lavish and neither was our lifestyle. I was happy and fulfilled during those years, and worked as a physiotherapist in public health institutions (without a salary from the State). I left unexpectedly following a retreat where I received “a call” to follow a different way.

During my convent years, I experienced great dedication shown by the sisters,frequently to the point of heroism. Like any organisation, it had its weaknesses, as had individual sisters, but the sense of trying to give as best a service as possible prevailed.

In many of the caring roles, the numbers individual sisters cared for was proportionally far greater than today and no training existed for many of the services. Religious life training was stark and focused on observance of a “rule”.

Dr Jacinta Prunty, senior lecturer in history in Maynooth, said in an article (the Tablet , March 2013) the women in laundries largely followed the “rule of life” lived by the sisters. “Each day was punctuated by prayer, Mass, meals, work, times of recreation, set-bedtime.”


Popular injustice
I feel an injustice is being shown to the sisters, with no consideration for their enormous contribution to Irish society and abroad in education, health and social care over the last 150 years.

I am not speaking for the sisters; they do not know I am writing this article.


Catherine McCann is a retired physiotherapist and counsellor, author and curator of Shekina Sculpture Garden