Archbishop Martin: ‘We must always be alert to inequalities in our educational system’ 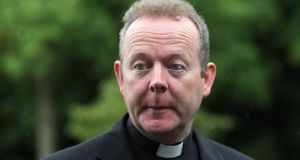 Catholic primate Archbishop Eamon Martin has said no young person should be turned away from a Catholic school based on the results of an entrance exam. Photograph: PA

No young person should be turned away from a Catholic school based on the results of an entrance exam, the Catholic primate Archbishop Eamon Martin has said. Such schools are called to serve all, he said.

In a homily marking Catholic Schools Week Archbishop Eamon Martin said “in this day and age no young person should be turned away from a Catholic school on the basis of their mark in an entrance test at the age of 10 or 11.”

Catholic schools “are called to serve all pupils and especially the poor and most disadvantaged of society. We must always be on the lookout for those who are being left behind or neglected in any way in our Catholic education system,” he said.

“The holy founders and foundresses of our Catholic schools were clearly inspired by a preferential option for the marginalised and poor.

“As Catholic schools, called to serve, we must always be alert to the inequalities in our educational system system where too many of our young people, particularly the socially disadvantaged, leave without meaningful qualifications or opportunities; where the responsibility for children from the most deprived backgrounds, minority ethnic communities or for those with the greatest educational needs seems to fall unevenly on the shoulders of only some of our post-primary schools,” he said.

“Too many of our young people are not making the transition to education, employment or training beyond the age of 16 and are ending up marginalised and often forgotten by the system. These are problems that concern us all. These are problems to be shared and tackled by all of us,” he said.

In a homily at St Malachy’s Church on Irish Street in Armagh he said he was “pleased” that “ academic selection will no longer be used as an entrance criterion for schools in the city of Armagh.”

Meanwhile a Church of Ireland study into small Irish primary schools will be launched in Dublin on Tuesday evening.

Research in these schools in England has shown they have a positive social climate, impact positively on pupil learning outcomes and offer models of community that larger schools can emulate. Policy in England supports small schools.