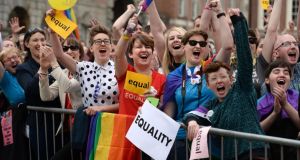 Celebrations in the court yard at Dublin Castleduring the results of the Referendum on Marriage Equality.Photograph: Dara Mac Dónaill / The Irish Times

The only Presbyterian Minister in Ireland who publicly welcomed the result of last May’s same sex referendum in the Republic in favour of same sex marriage has recanted.

Following the referendum Rev Christina Bradley, who ministers in Portadown Co Armagh, described the 62 per cent majority as “inclusive and compassionate.”

She told the Portadown Times: “The referendum wasn’t a debate on the institution of marriage as the basis of human society as we know it, but about ending discrimination.

“Who is the state and who is the church in a democratic society? It is the people. The people (of the Republic) have voted by an overwhelming 62.1 per cent majority to be inclusive and compassionate.”

Rev Bradley, minister at Armagh Road Presbyterian Church in Portandown, continued: “This warm-heartedness is good to see in a world which often is a cold place as much for women in leadership as it is for gay and lesbian people in churches. I welcome the yes vote.”

Her comments prompted the Church to set up a special commission to investigate her same sex views. Its conclusion was read out in her church on Armagh Road Portadown last Sunday while she looked on.

The statement said: “Mrs Bradley confirmed to Presbytery that she fully accepts the teaching of the Westminster Confession of Faith, that ‘marriage is to be between one man and one woman’. Mrs Bradley also confirms that same-sex marriage is contrary to the will of God revealed in the Bible and accepts that homosexual practice is sinful in God’s sight.”

“Mrs Bradley also accepted that her welcoming of the same-sex referendum vote was ‘open to misinterpretation’, and said that she ‘had no intention of bringing the Church into disrepute’.”

Canon Charles Kenny, spokesperson for Ireland’s gay affirming group Faith in Marriage Equality, said he “was dismayed that such pressure had been put on the Presbyterian Minister to recant”.

The Presbyterian Church in Ireland “was trying to shut down discussion in the Church on the inclusion of its gay and lesbian members” he said and that he knew “members of the Presbyterian Church, lay and clergy, who were affirming of gay people but were too frightened to say so”.

He predicted that “the action of the Church would send a very damaging message to its gay members and make the Presbyterian Church in Ireland an even colder place for them and their families”.