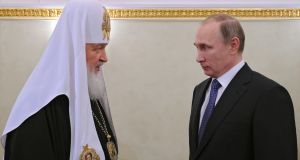 Patriarch Kirill of Moscow with Russian president Vladimir Putin. The rift between the western and eastern branches of Christianity dates to the Great Schism of 1054. Photograph: Alexey Nikolsky/EPA

Pope Francis will stop in Cuba on his way to Mexico next week to hold a historic meeting with Patriarch Kirill of the Russian Orthodox Church, the Vatican said on Friday.

The unprecedented meeting next Friday, the first in history between a pope and a Russian Orthodox patriarch, could be a hugely significant step towards healing the 1,000-year-old rift between the western and eastern branches of Christianity, which split in the Great Schism of 1054.

Modern popes have met in the past with the ecumenical patriarchs of worldwide orthodoxy, who are based in Istanbul.

But those patriarchs play a largely symbolic role. The Russian Orthodox Church is the most influential because it counts some 165 million of the world’s 250 million Orthodox Christians.

The Vatican said the two men would hold talks at Havana airport and that the meeting was expected to last at least two hours. It was arranged with the help of Cuban president Raul Castro, who hosted the pope in Cuba last year.

“This meeting of the primates of the Catholic Church and the Russian Orthodox Church, after a long preparation, will be the first in history and will mark an important stage in relations between the two churches,” a joint statement said.

Both sides hoped the meeting would be “a sign of hope for all people of good will”, it added.