Pope Francis opens ‘Synod on the Family’ in Rome 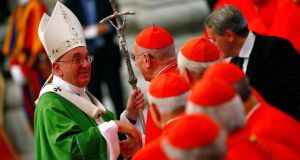 Pope Francis greets a cardinal as he leaves at the end of a mass to mark the opening of the Synod on the Family in St Peter’s Square at the Vatican today. Photograph: Tony Gentile/Reuters.

To the accompaniment of Gregorian chant and a reading from the prophet Isaiah, Pope Francis this morning formally opened the Vatican’s Extraordinary General Synod on the Family at mass in the Basilica of St Peter.

Previewing an eagerly awaited event which some see as the most significant gathering of its kind since the Second Vatican Council in the 1960s, the pope underlined the gravity of the moment.

He continued: “But in both the ancient prophecy and in Jesus parable, God’s dream is thwarted. Isaiah says that the vine which he so loved and nurtured has yielded ‘wild grapes’ (5:2,4). God expected justice but saw bloodshed, righteousness, but only a cry of distress...”

Referring to the synod, the pope said that this two week long meeting of mainly cardinals and bishops is also called on to work in God’s vineyard.

In comments which appeared to play down the intellectual, conservative-progressive “skirmishes” which have marked the build up to the synod, the pope said: “We too, in the Synod of Bishops, are called to work for the Lord’s vineyard. Synod assemblies are not meant to discuss beautiful and clever ideas, or to see who is more intelligent...They are meant to better nuture and tend the Lord’s vineyard, to help realise his dream, his loving plan for his people...”

Later, addressing a 50,000 strong crowd from the window of the Pontifical Palace in St Peter’s Square during the midday Angelus prayer, the pope repeated the concept, saying: “The Synod Fathers, coming from all parts of the world, along with me will experience two intense weeks of listening and dialogue, enriched with prayer, on the theme of ‘The Pastoral Challenges Facing The Family In The Context Of Evangelisation’...”

Underlining his point, the Pope held up a copy of the bible urging families not to put it “on the shelf” but rather to keep it always close to hand in order to “read it often”.

Before he saluted to the crowd with his now customary greeting of “Buon Pranzo” (Have A Good Lunch), the pope called on the faithful to pray for the work of the Synod.

Given that this Synod may deal with a wide range of family-related issues including marriage breakdown, unmarried couples, same sex marriage and the ban on divorced or remarried Catholics receving the sacrament of communion, all those prayers will be badly needed.