Pope Francis: ‘He seems to be walking the walk. He appears to be listening’

Christians, people of other faiths and none, give their views on Pope Francis 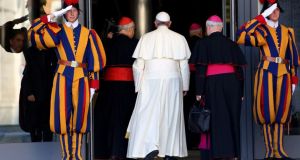 Pope Francis arrives for the opening of the Synod on the themes of family in Vatican City. Photograph: Franco Origlia/Getty Images

In his former life, Pope Francis was noted for his openness to people of all faiths and of none. In 2011, he said “dialogue is born from an attitude of respect for the other person, from a conviction that the other person has something good to say. It assumes that there is room in the heart for the person’s point of view, opinion, and proposal.

“ In order to dialogue it is necessary to know how to lower the defences, open the doors of the house, and offer human warmth.”

How do non-Roman Catholics see Pope Francis? The Irish Times decided to find out, beginning with three Church of Ireland women who were running the Mothers’ Union nappy-changing stand at the recent National Ploughing Championships in Co Laois.

“He’s a very innovative man. I think he’s a fresh breath of air in the Catholic Church and the whole Christian church. He’s a very humble man and that comes across in everything he does. He seems to want to be down with the people and among the people. An ordinary Catholic person doing the best they can would feel more affinity with him; that he is not kind of up there looking down at them. I think he has to be good for Christian ecumenism and church unity.”

“I’m impressed with him. I like some of the things he has said and done and I would be hopeful that he might bring some changes. I suppose, as a woman as well as a Christian, I would love to see him give more position to ladies. Not just the ordination to the priesthood, which is probably a very big thing.”

“He seems to be walking the walk. He appears to be listening. To me, he appears to be very well aware of difficulties that people are facing in their lives. I have many friends who are women in the Roman Catholic faith and I think there is a greater role there. Listening is good no matter what denomination you are talking about.”

“I don’t believe in his stand on the scriptures. We believe that when the Lord entered heaven he sent the Holy Spirit to be his representative on Earth. The pope claims to be that. It’s my great difficulty with him. As a personality he doesn’t impinge on me in any way. I would like to see every person come to a knowledge of Christ, accept him as their Saviour and go to God through Christ, the only mediator, rather than a priest or a pope.”

“I believe generally he’s a very good man, he has a good heart. I believe he speaks to God and he’s been ordained by God to do the work he has done, but I don’t believe in the traditions of the Catholic Church. I would like to see a lot more people, priests, get on the streets, talking with the people, showing the love of God. Start feeding the homeless more, start reaching out more, start going out to the people, to everybody. Even rich people need the love of God.

“A church should be a hospital for sinners not a museum for saints. Jesus came preaching love not religion. We’re out there to save the lost not to argue and fight. I believe every pastor, every leader should be a good sheepdog. We should lead the sheep together and point them towards Jesus. Let’s work together and not be fighting anymore.”

“Pope Francis is a man who is inclusive. In his address to Muslims, when congratulating them on Eid-ul-Fitr, he called them ‘dear friends’, a very impressive phrase. He, as a Catholic leader, sets an inspiring example. He calls for promotion of respect in word and action. He took off his shoes to enter the Dome of the Rock, from where the Prophet Muhammad, peace be upon him, ascended to heaven.

“From his perspective, the way to achieve mutual respect is through education and kindness towards others, fundamental in coexistence. At the al-Aqsa mosque compound he urged people of all religions to ‘work together for justice and peace’. He then prayed at the Western Wall, bowing his head as he touched the stones.

“He made a courageous statement: ‘We are not yet done with the present-day Herods, who fear peace more than war . . . and who are prepared to continue killing’.”

“He is a pope of the global south with good PR in the global north. But the future of Catholicism will be shaped more by world demographics than the personality of Pope Francis. Two in every three Catholics live in the global south, so Pope Francis has to appeal to Catholics with very different values. In the north, Catholic claims about reality are increasingly seen as unbelievable, while Catholic claims about morality are increasingly ignored. In the south, Catholics are more likely to believe in miracles and exorcisms, to be conservative on sexual issues and progressive on social justice issues.

“In the long run, if the World Values Survey is accurate, the south will gradually develop as the north has.”

“I think he’s very, very good; following in the footsteps of his predecessor. He was a wonderful man [to the Jewish people] in Argentina. I think he’s a good man. He had a very positive visit to Israel. Anything like that has to be seen in a positive light as what’s going on in the world now is horrendous. Unfortunately, it seems to be Israel which gets denounced all the time. The other day 139 children were killed in Syria and there was not a word. Children are children are children. He’s doing a great job and I hope he has the health to continue.”

“He certainly is one who is prepared to embrace change and he seems to have changed within himself over problems he had in Argentina. He’s not going to change dogma, as some people might infer. But I think he’s a most Christo-centric man who is helping people to see Christ as the centre of their lives. He seems very open while remaining true to his own tradition. I think he will make an impact provided the old guard allow him the freedom.”

“If we want to evaluate his performance on clerical child sex abuse we must concentrate on his actions as opposed to words spoken. For instance, the task of revising sections of canon law which deal with sanctions on offending priests has not been completed despite it being acknowledged at the highest level that it needs revision. That task was given to a Vatican commission in 2008. There has been no change since. I welcome the inclusion of a survivor on the Commission for the Protection of Minors and, in particular, that [abuse survivor] Marie Collins is part of it. The church should see survivors as an important resource. I would like the commission be given greater authority, more resources, and prioritised more than it is. Anyone who harmed a child or allowed a child be harmed should not be in ministry, regardless of who it is or the consequences. There should be a clear setting-out of principles which would be applied.”