Pontiff to celebrate feast of St Andrew, patron of the Orthodox church, in Istanbul 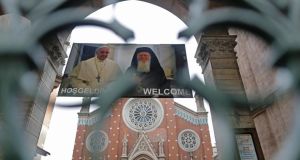 A banner showing Pope Francis and and Orthodox Patriarch Bartholomew I is seen through a gate of the St Antuan church in Istanbul, Turkey. Photograph: Tolga Bozoglu/EPA

Pope Francis, who originally indicated he might not travel as much as some of his immediate predecessors, is back on the road again this weekend as he makes an intriguing, potentially difficult visit to Turkey.

At the end of a year which has seen him travel to both Israel and South Korea, Francis this morning flies into Ankara where he will be greeted by president Recep Tayyip Erdogan, leader of this 76 million strong, 99 per cent Islamic country.

Given the possible polemics engendered by this visit, one might expect to find half of Turkey gearing itself for a momentous occasion. In reality, Istanbul, which the pope visits tomorrow and on Sunday, was yesterday totally “pope free”. No posters, no flags and almost no media comment on the visit. To find a poster announcing for the event, you had to go to the press centre in the basement of Istanbul’s Hilton Bosphorus Hotel.

Essentially, the pope’s main destination is Istanbul where he has been invited by the Ecumenical Patriarch of Constantinople, Bartholomew I, to take part in Sunday’s celebration of the feast of St Andrew, the patron of the Orthodox church. This weekend will see a meeting between the spiritual leaders of some 300 million orthodox faithful and of 1.2 billion Catholics – both, theoretically, still trying to patch up the 1054 Great Schism.

However, the persistent failure of the Christian East and West to rediscover their lost unity strikes but a minor chord in a country where, to a large extent, in the words of the Apostolic Vicar of Istanbul, Bishop Louis Pelatre, “both Christian churches are invisible”. The biggest and most difficult issue this weekend will be the thorny one of relations between Islam and Christianity.

“We hear all these huge condemnations of Islamic violence . . . We keep talking about Isis and al-Qaeda . . . but we don’t hear anything about the millions of Muslims that were killed by these powerful countries like the USA, Britain and some European countries.

“As Muslims we would like to see the conclusions of these good approaches [of dialogue from Francis] . . . So far, it’s just talking . . . people [in the West] do not point out that it is Islam and Muslims who suffer most from this violence, it [jihadistic violence] is an affront to Islam.”

Senior papal spokesman Fr Federico Lombardi indicated that in Ankara today, the pope will make a “very important” speech on Christian-Muslim relations. This will come when he visits the Diyanet, Turkey’s religious affairs department, an organisation which not only employs 60,000 imams and 10,000 muezzins (the men who via loudspeakers summon Muslims to prayer) but also prepares and distributes the homilies for Friday prayers throughout Turkey.

On top of that, he becomes the first foreign leader to be hosted at Mr Erdogan’s controversial, 1,000 room new palace outside Ankara. Not for nothing, the pope will not be using his famous “popemobile” on this trip.