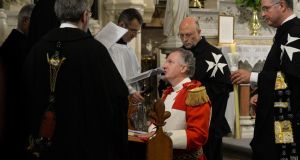 Knights of Malta Fra’ Paul Caffrey during his solemn profession before The Prince and Grand Master Fra’ Matthew Festing at St Kevin’s Church in Dublin at the weekend. Photograph: Cyril Byrne 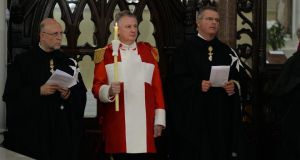 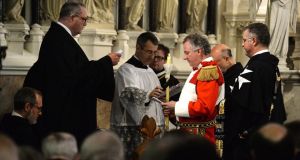 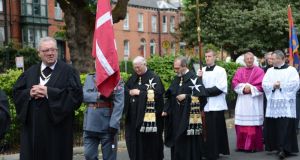 A grandmaster and prince, an archbishop and scores of the faithful wearing heavy black robes and mantillas marched solemnly into St Kevin’s Church in Dublin on Saturday afternoon to bear witness to the elevation of an Irish Knight of Justice for the first time in five centuries.

Despite the passage of time little appeared to have changed about a ceremony conducted almost entirely in Latin over two hours in a heat which caused several member of the congregation to swoon.

At the end of it all, Dubliner Paul Caffrey was declared to be the first Irish professed knight of the Order of Malta since Henry VIII swapped wives and began his suppression of Catholicism in the 1520s.

The Order of Malta – or to give it its proper title, the Sovereign Military Hospitaller Order of St John of Jerusalem, of Rhodes and of Malta – is best known here for its ambulance and first-aid services, but it is a lot more complex than that.

It is one of a tiny number of chivalrous orders created in the Middle Ages which is still active and the only one that is both religious and sovereign in nature. Its prince and grandmaster, Matthew Festing – who presided over Saturday’s ceremony in the company of the Archbishop of Dublin, Diarmuid Martin – has the status of Cardinal in Canon Law.

It has tens of thousands of staff and volunteers caring for the sick, the injured and the poor all over the world and its services range from mobile soup kitchens in Dublin to ambulance helicopters in Haiti and maternity hospitals in Bethlehem.

On Saturday there was some talk among the knights about the order’s ongoing efforts to be granted full diplomatic status in Ireland and speculation that a fresh round of talks between it and the Department of Foreign Affairs was on the horizon. But for the most part the attention was on Caffrey.

The 51-year-old art historian and lecturer at the National College of Art and Design spent five years preparing to take his vows of poverty, obedience and chastity in order to become Ireland’s only first class knight in 500 years. There are almost 200 knights of the second and third order in the Republic and many were in the congregation to witness a little piece of history being made.

“This is my parish, my great grandparents lived near here and my grandmother grew up around the corner and it is where my father made his First Communion,” he said.

“At least I think it was. Although, now that I think about it, he was expelled from a few schools around here so I’m not sure.”

The order, which was born in the 11th century in Jerusalem ahead of the Crusades, first made its mark in Ireland in the 12th century when it and the Knights Templar were given land to build fortified preceptories and, later, hospitals and priories.

All its Irish property was lost to the Tudors during the Reformation and it wasn’t until 1934, when an association was re-established here, that it started developing its now ubiquitous ambulance and first-aid corps.

While its uniformed volunteers are its public face, it is the knights – both those who take holy orders like Caffrey and the lay knights – who are charged with shaping the organisation.

He suggested that the absence of a full diplomatic relationship between the order and the State had not helped either.

“We have full diplomatic relations with 104 countries but not Ireland, that puts us at a disadvantage here.”