Opinion: Catholic Ireland a much safer place for children thanks to Murphy Commission 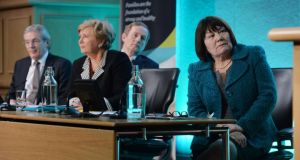 ‘The audits show that there has been a vast improvement in the manner of dealing with cases and of reporting to the Gardaí and the Children’s Agency Tusla. But the improvement was often from a low starting base.’ Above, Gordon Jeyes, Chief Executive, Tusla, Taoiseach Enda Kenny, Frances Fitzgerald, Minister for Children and Youth Affairs and Norah Gibbons, Chairperson Tusla, at the official launch of the Child and Family Agency Tusla, in Dublin Castle. Photograph: Alan Betson / The Irish Times

The fifth anniversary of the publication of the Murphy Report on the management, by both Church and State organisations, of allegations of the sexual abuse of children by priests working in the Archdiocese of Dublin, brings back to me the horror of the revelations that the report contains.

Inevitably, my first reaction is to remember and recognise the horrible abuse that children experienced, which has left them with wounds and hurts in their lives which still remain today. The second reaction is to note how their hurt was in many cases made worse by the inadequacies of the responses of Church leaders and of the HSE and Garda Síochána.

Looking back over these past five years, and over the years examined by the Murphy Commission, my thoughts have curiously been dominated in these days by one group, rarely mentioned, but who are real heroes of the abuse scandals: the mothers and fathers of children who had been abused who turned to the Church authorities, not with a reaction of hostility but simply with a passionate concern to ensure that no other child would have to endure what their child did.

They did not come with legal knowhow or with psychiatric expertise or with any intention to damage the Church. They simply wanted to tell what had happened to their child and tried to put into words how deep the wound was. In some cases the story they had to tell ended in the tragedy of someone taking their own life.

Their evidence made it abundantly clear that the effects of sexual abuse of children were truly devastating. These parents came forward with great courage, very often without any other support than that of their own hurt and their own conscience. Very often, at the time they came forward, abuse was still taking place. The simple language of these mothers and fathers ought to have been enough to touch hearts and change policy.

The number of children who were abused, especially by a group of serial abusers, in the Church of Jesus Christ, in the Archdiocese of Dublin, is staggering. Yet it took a very long time to bring people to realise that there was only one way to respond to the appeals of these courageous parents and that was to remove any priest who was a risk to children and to report crimes.

It is to be hoped that all the religious communities will ask to be subject to the audit by the standards of the National Board, which are the standards of the Irish Church. The audits show that there has been a vast improvement in the manner of dealing with cases and of reporting to the Garda and the Children’s Agency Tusla. But the improvement was often from a low starting base.

The Irish Church has had in place a progression of clear norms since 1996 and it is hard to accept that over a period of 18 years some Church authorities had still not been living up to their commitments.

Today there are structures in place at parish level to ensure that the safeguarding standards are respected and that there are trained child protection representatives in every parish. This is due to the work of priests and religious, of lay men and lay women whose love of the Church is such that they are prepared to be part of a solution to a disastrous problem which was not of their making.

The Catholic Church in Ireland is certainly a much safer place for children as a result of the stark revelations of the Murphy Commission. For this to continue and improve, it is crucial that vigilance does not cease. Sadly, even with solid child safeguarding measures in place, abuse of children has taken place which remained undiscovered for some time.

There have been attempts to undermine the findings of the Murphy Commission. Was it perfect in its findings? Obviously there were failings, but the basic thrust of the story of abuse and mismanagement remains unchallenged and cannot be revised. Times were different, some say, and we did not know what we know today. Times would have been very different had people been more attentive to the message of those heroes of the Murphy Report who in in tears about what had happened to their own children asked that action be taken to ensure that it never happened to someone else’s child. Dr Diarmuid Martin is Catholic archbishop of Dublin.