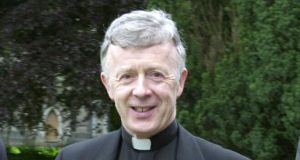 At the launch of Towards Peace, Archbishop of Tuam Michael Neary said it was “so disconcerting that a ministry which ought to have brought hope and healing instead brought harm and hurt and left in its wake brokenness, betrayal and disillusionment”. Photograph: Cyril Byrne/The Irish Times

Towards Peace, a new spiritual support service for people whose faith has been damaged by clerical abuse and its handling by church authorities, was launched in Knock, Co Mayo, tonight by the west’s Catholic bishops.

The service was launched in Cork on May 25th by the Bishop of Cork and Ross, John Buckley, and is to be launched in the north and east of the country at later dates.

Towards Peace is one of three Catholic Church agencies in Ireland set up to help survivors of abuse. The others are the National Board for Safeguarding Children (NBSC), which monitors child protection in Catholic institutions across the island, and Towards Healing, the telephone counselling referral service. All are sponsored by the Catholic Church in Ireland.

At the launch tonight, Archbishop of Tuam Michael Neary said it was “so disconcerting that a ministry which ought to have brought hope and healing instead brought harm and hurt and left in its wake brokenness, betrayal and disillusionment.

“A ministry which should have brought light, brought darkness, a ministry intended to bring joy, brought deep sadness. There is no doubt that the ministries of priesthood and religious life have been seriously tarnished by such evil actions.”

Accompanied by Bishops Christy Jones of Elphin, John Fleming of Killala, Brendan Kelly of Achonry, John Kirby of Clonfert and Martin Drennan of Galway, Archbishop Neary said that while Towards Peace was “geared mainly towards those who have suffered abuse, there is recognition that families, friends and indeed the people of God at large have been affected in different ways by the scandal.”

Leaving Cert: Use of historical data would allow ‘good calculations’ of grades 01:43
Q&A: Covid vaccines – so what’s going to happen, and when? 01:12
Almost 300,000 essential therapy appointments missed in first half of year 01:00
Domestic violence is worsening amid Covid-19 pandemic, Garda figures show 01:00
Priority groups for Covid-19 vaccine to be decided next week 01:00