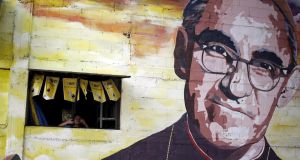 A man closes a window in the wall next to a mural of the late Salvadoran Archbishop Oscar Arnulfo Romero in Panchimalco, on the outskirts of San Salvador. Photograph: Jorge Dan Lopez/Reuters

The beatification of Archbishop Óscar Romero on Sunday in San Salvador, capital of El Salvador, will be marked at the Festival of Peoples’ Mass in Dublin’s Pro Cathedral that evening.

Celebrated by Archbishop of Dublin Diarmuid Martin at 6.30 pm, the Mass will be attended by President Michael D Higgins, a regular visitor to troubled Central America in the period during which Archbishop Romero was murdered.

He was shot dead on March 24th 1980 while celebrating Mass in a hospital in San Salvador because of his outspoken defence of the poor. The Archbishop had worked closely with Trócaire, whose chairman then was Bishop Eamon Casey.

Trócaire had funded the El Salvador Human Rights Commission, founded by Archbishop Romero in a response to the killing of thousands of people.

Two weeks before his murder in 1980 he wrote a letter to Trócaire thanking it and the Irish Bishops’Conference for “your kindness and preoccupation for our country and our Church.”

Bishop Casey narrowly escaped injury at Archbishop Romero’s funeral when a death squad opened fire on the huge crowds gathered there outside the Cathedral in El Salvador. He helped bring people to safety inside the Cathedral and spent almost two hours there with the dead and injured.

Trócaire executive director Éamonn Meehan said Archbishop Romero was “a friend of this organisation as well as a valued partner....He was an outspoken champion of the powerless and the poor, and was ultimately murdered for his unflinching defence of human rights.”

His beatification sent “a powerful message of solidarity to those who continue to put their lives at risk to speak out against injustice and human rights violations in Central America, and indeed throughout the world,” he said.