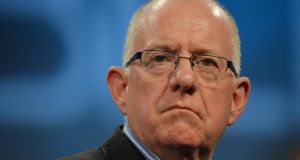 The commission of investigation into mother-and-baby homes will look at how the system operated from the foundation of the State until the 1980s.

Minister for Children Charlie Flanagan yesterday briefed the Cabinet on the interim report of a cross-departmental review committee which is preparing for the investigation.

The committee, composed of senior officials from eight Government departments and some State agencies, was asked to examine the scope of the issues relevant to a commission of investigation.

Mr Flanagan said, after the meeting, that following disturbing revelations regarding the mother-and-baby home in Tuam, Co Galway, the Government had decided to establish the investigation.

“The report of the cross-departmental committee is a preliminary examination of a very complex range of issues. It will inform the Government’s deliberations on the terms of reference of the commission of investigation,” said Mr Flanagan.

He said more than 100 submissions had been received from individuals and groups and, along with the report of the cross-departmental committee, they would help finalise terms of reference for the commission.

“I am deeply aware that there are people living with the daily reality of these painful experiences, so establishing an appropriate inquiry, which is capable of effectively addressing these important matters in a sensitive and timely manner, is my primary concern.

“I intend to . . . finalise terms of reference in consultation with Government colleagues and to bring a resolution to the Oireachtas for consideration prior to the summer recess,” said Mr Flanagan.

Following the Cabinet meeting the Minister told the Fianna Fáil spokesman on children, Robert Troy, that he would keep in contact with him and other party spokesmen to get the widest possible consensus.

Mr Flanagan gave a commitment to report back to the Dáil before July 17th. He said he wanted to establish the truth and historical context of the issue, taking into account the needs of children of today.

“There is . . . the heightened priority and workload given to my department in the context of the awareness of the need to progress the importance and urgency of adoption reform. I am conscious of the cost implications,” said Mr Flanagan.

In their submission to Mr Flanagan, the Irish Human Rights and Equality Commission (designate) called for an investigation “that meets Ireland’s human-rights obligations and is underpinned by legislation that can ensure effective remedies.”

Acting chair Betty Purcell said the inquiry should include “all mother-and-baby homes . . . and any similar institutions.”

In their joint submission Adoption Rights Alliance and Justice for Magdalenes Research proposed that the commission “should focus on the issue of children born out of wedlock in Ireland since 1922 rather than institutions per se.”