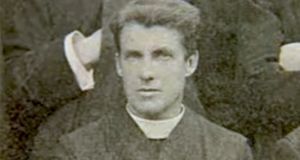 A miracle allegedly performed more than 60 years ago has led to Irish Jesuit Fr John Sullivan being approved for beatification by the Catholic Church.

Even though several miracles have been attributed to Fr Sullivan, his path to sainthood has not exactly been fast since his name was registered by the postulator of causes for sainthood as far back as 1944.

His cause has now moved on because the Congregation For The Cause of Saints this winter ruled that he had indeed performed a miracle.

That miracle allegedly happened in 1954 when Dublin woman Delia Farnham, who had been praying to Fr Sullivan, made a “miraculous” recovery from a cancerous neck tumour.

Among other miracles attributed to Fr Sullivan was one concerning the nephew of Irish revolutionary, Michael Collins.

The “Big Fella’s” nephew, also called Michael Collins, had suffered a paralysis as a child. Fr Sullivan reportedly prayed with the boy and also touched his damaged leg. Subsequently, the “trouble” with young Collins’ leg ended and it never again recurred.

The child of a mixed marriage, John Sullivan’s life was marked by a remarkable ecumenical and spiritual journey.

Born in 1861 into a wealthy Dublin family, he was the son of Edward Sullivan, a member of the Church of Ireland, a successful barrister and later the Lord Chancellor of Ireland. His mother, Elizabeth Bailey, was a Roman Catholic from a prominent land-owning family in Passage West, Co Cork.

As was the custom of the time, he was raised as a Protestant but converted to Catholicism at the age of 35, being ordained a priest 11 years later. He subsequently joined the teaching staff at the Jesuit school of Clongowes Wood where he remained for the rest of his life.

Known for his life of deep prayer and his work with the poor and afflicted, Fr Sullivan was a familiar figure in the villages of Kildare, close to Clongowes, as he spent much of his time walking and cycling to visit those who were troubled, sick or dying. Even before his death in 1933, many people had testified to the healing power of his prayers.

Jesuit Fr Conor Harper, the vice postulator for the Sullivan cause, has gone on record to emphasise the important ecumenical aspect of Fr Sullivan’s life, pointing out that he is “remembered and revered” by both the Catholic and Protestant traditions.

The Church of Ireland Archbishop Michael Jackson, quoted by the Clongowes Wood website, touched on the same theme, saying: “We in the Church of Ireland give thanks for the public recognition of holiness, humility and service of humanity on the part of John Sullivan.

“We rejoice in the fact that, as well as living a life that honoured God and the Jesuit Order, he spent half of his life as a member of the Church of Ireland. In this sense the recognition of his holiness has a strong ecumenical feel to it, as he never rejected the influence of the Anglican tradition on his spiritual flourishing.

“Members of Portora Royal School, where John Sullivan was educated, will also rejoice on this day.”

As of now, no date has been set for the beatification, which Pope Francis approved this week, but an annual anniversary Mass in memory of Father Sullivan will be celebrated by Bishop Denis Nulty in Clongowes Wood College on Sunday 8th May.

Former taoiseach Bertie Ahern quoted Fr Sullivan in his farewell speech to the Dáil in 2008: “Take life in instalments. This day now, at least let this be a good day. Be always beginning. Let the past go. Now let me do whatever I have the power to do.”