Long days means it isn’t easy being Muslim in Ireland

Ramadan in June involves fasting for 20 hours a day: no food, water, smoking or sex 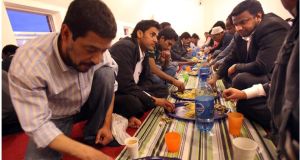 Men gather at the Anwar-i-Madina Mosque on Talbot Street, Dublin to eat after fasting and praying during Ramadan. Photograph: Brenda Fitzsimons.

Fancy fasting for 20 hours a day? No food, no water, no smoking, no sex, and broken sleep. That is the daily lot, from sunrise to sunset, of Muslims in Ireland since Thursday, June 18th. It will continue until July 18th.

Ramadan at this time of year includes our longest day, as it will next year, and in 2017. It is the ninth month of the 12-month Islamic calendar which is based on the lunar cycle and has 354 days.

Ali Selim is from Luxor in Egypt and has been in Ireland for 17 years. A senior member of staff at the Islamic Cultural Centre in Dublin’s Clonskeagh, he and his wife have five children, aged from 16 to three.

The three-year-old is excluded from fasting, as would be the sick, the injured, the old, and pregnant women. However, their 16-, 14-, 13-, and nine-year-olds observe Ramadan fully.

His working day is, as usual, nine to five. When he goes home in the evening he rests for a bit while the children “sit at the table and read Stories of the Prophet, with each of them telling a story every day”. Then food is prepared which they eat at about 10pm. There’s a variation of a minute or two each evening.

They eat dates first, stop for prayer for two or three minutes, before finishing their food. At 11pm they go to the mosque in Clonskeagh and pray until midnight. Then they return home and he goes to bed.

At 1.30am he wakes up and the family eat again, pre-dawn, at 2am. It is their last food and drink before 10pm that night. He returns to bed at about 3.15am before rising for work at 8am.

Irish Times colleague Faisal Mansoor is from Jhelum city in Pakistan. He has been in Ireland 11 years and is a technical support engineer. He and his wife Miriam have a baby girl who is almost three and they are expecting another child.

He himself has been doing so since he was nine or 10. The long hours of fasting since June 18th “were tough for the first few days but it’s not so bad now”.

In many ways people “look forward to Ramadan”, he said. “It refreshes you, spiritually as well” and encourages “humility and politeness” in dealing with people.

He prays whenever he can. He and friends are planning to give their zakat donation to needy families in Pakistan. He believes Ramadan “makes you appreciate your blessings, teaches discipline and helps you learn patience”.