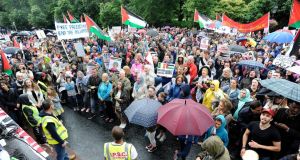 Israel was unequivocally denounced for its actions in Gaza and accused of war crimes in an unprecedented and strongly worded sermon by a senior Irish priest in Dublin this morning.

Speaking at the Eucharist service in Dublin’s Christ Church Cathedral Canon Patrick Comerford recalled that, in the context of what has been happening in Gaza, the Israeli ambassador to the US Ron Derner had told a Christian lobby group there last week that some were “ shamelessly accusing Israel of genocide and would put us in the dock for war crimes. The truth is that the Israeli Defence Forces should be given the Nobel Peace Prize . . . a Nobel Peace Prize for fighting with unimaginable restraint.”

Canon Comerford, lecturer in Anglicanism, Liturgy and Church History at the Church of Ireland Theological Institute in Dublin, rejected this assertion, recalling also that truth was the first casualty in war.

‘Battered children’ “Night after night, on television screens and impartial news outlets, I see the wounded, injured, maimed and battered children, frightened, screaming and even mute in shock and terror, brought by inconsolable and despairing parents to hospitals deprived of adequate facilities and medicine,” he said.

As for himself, he was “shameless in my accusations of war crimes” against Israel “and when I describe Gaza as a wasteland and a wilderness. The crowds cannot flee in fear from the tyrant, for they are hemmed in and under siege, barraged by flares at night and bombarded by missiles by day, irrespective of whether they support Hamas or not, children or adults, fighters or civilians.

“Like the crowd in our Gospel reading, they are being told to go away. But there is nowhere for them to go, not even the sea.”

Lesson of history The principle casualties of war, time and again, he said, “are not the failed politicians, the failed diplomats, or even the poor soldiers, but civilians, children, the young and the elderly, women and men. And truth.” He recalled the saying that “in war, truth is the first casualty “, sometimes attributed to the Æschylus, a playwright in ancient Greece.

The 18th century Anglican saint Samuel Johnson wrote: “Among the calamities of war may be justly numbered the diminution of the love of truth, by the falsehoods which interest dictates and credulity encourages.”

Canon Comerford asked “how long have we known that war never ends war, that war only brings the delusion of peace? The Roman orator and historian Tacitus, who lived at the time of the Gospel writers, condemns those who plunder, slaughter and steal and then falsely call the result Empire, for ‘they make a wasteland, and they call it peace’.”