How the Irish helped to invent modern-day Halloween

Catholic Church created the day, but the Irish fixation on hell influenced its evolution

Between 45,000 and 50,000 people packed the streets of Galway city centre on Sunday evening for the Savage Grace: Macnas Parade. President Michael D Higgins and his wife Sabina were among the crowds watching the annual event. Video: Joe O'Shaughnessy 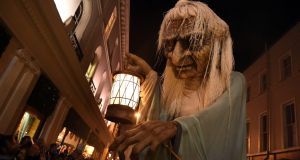 So! You thought Halloween was purely a Celtic invention brought to America by the Irish and reimported from there with Coca Cola and burgers. Wrong.

Halloween was created by the Catholic Church, long before America first made an appearance in Christopher Columbus’s retina.

It falls on October 31st because of Pope Gregory III, who died in 741.

All of 1,275 years ago, he decreed that “All Hallows”, a day to honour all saints in heaven, should fall on November 1st.

A century later, Pope Gregory IV commanded that this feast day be observed throughout Christendom.

In 998, St Odilo of the Cluny monastery in France added a celebration on November 2nd for the souls of the dead, which became known as All Souls’ Day.

This is where we Irish come in, at least according to Fr Augustine Thompson, professor of history at the Dominican School of Theology at Berkeley, California.

We indomitable Irish, with typical egalitarian instinct where any celebration is concerned, wondered about whether this day excluded souls in “the other place”. Hell, to you and me.

As Fr Thompson put it: “It seems Irish Catholic peasants wondered about the unfortunate souls in hell.

“After all, if the souls in hell are left out when we celebrate those in heaven and purgatory, they might be unhappy enough to cause trouble.”

“So it became customary to bang pots and pans on All Hallows’ Eve to let the damned know they were not forgotten.

“Thus, in Ireland at least, all the dead came to be remembered, even if the clergy were not terribly sympathetic to Halloween and never allowed All Damned Day into the church calendar.”

However, dressing up in ghoulish costumes didn’t begin with the Irish.

The French started that, on All Souls’ Day, “during the 14th- and 15th-centuries.

“Late medieval Europe was hit by repeated outbreaks of the bubonic plague – the Black Death–and it lost about half its population,” Fr Thompson said.

The intention was “to remind everyone of their own mortality. We know these representations as the ‘danse macabre’, or ‘dance of death’.”

The date of this costume custom moved to Halloween when the Irish and French met in the North American colonies and . . .er . . . “intermingled”.

As for “trick or treat”, Fr Thompson’s take on this tradition is suitably sinister.

It was “the oddest and most American addition to Halloween and is the unwilling contribution of English Catholics”, he said.

He traces its origin to Guy Fawkes and his failed Gunpowder Plot on November 5th, 1605, as well as the contemporary Penal Laws, which denied Catholics any rights and executed their priests.

Guy Fawkes Day was one of celebration in Protestant England, when “bands of revellers would put on masks and visit local Catholics in the dead of night, demanding beer and cakes for their celebration: trick or treat!”

This practice spread to the American colonies, where, over time, it lost its historical baggage and moved from November 5th to October 31st.

Witches, he said, were added to the mix in the late 19th-century by greeting card companies. However, the cards failed to take off, so to speak.

Around the same time, “ill-informed folklorists introduced the jack-o’-lantern. They thought that Halloween was Druidic and pagan in origin.

“Lamps made from turnips, not pumpkins, had been part of ancient Celtic harvest festivals, so they were translated to the American Halloween celebration,” he said.