Government ‘pulled out all the stops’ in Halawa case - Costello 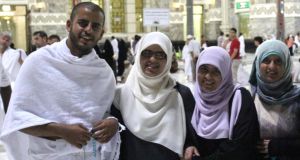 The sister of an 18-year-old Irish Muslim man, detained in an Egyptian jail without charge or trail since August of last year, has criticised the Government for not doing enough to secure his release.

Ibrahim Halawa from Firhouse in Dublin was arrested with his three sisters at a mosque in Cairo where members of the Muslim Brotherhood and other supporters of deposed president Mohammed Mosri sought refuge during violent street rioting.

The four siblings are children of Sheikh Hussein Halawa, imam of the Islamic Cultural Centre of Ireland at Clonskeagh in Dublin. In early June last year the Halawas arrived in Cairo with their mother for an annual family holiday, several weeks before Mohammed Morsi’s ousting by the army on July 3rd.

Sheikh Halawa is secretary of the European Council for Fatwa and Research, a group of scholars which gives religious opinions on matters specific to Muslims in Europe. It is an offshoot of the Federation of Islamic Organisations in Europe, an umbrella group of various branches and affiliates of the Muslim Brotherhood in Europe.

On RTE Radio One’s This Week programme, Soumaia Halawa claimed that, while support for her brother from the Irish embassy in Cairo had been “very good”, she felt the Government and Department of Foreign Affairs had not taken “serious actions”.

Minister of State at the Department of Foreign Affairs Joe Costello rejected the accusations and said the Government “has pulled out all the stops to an inordinate degree” in the case.

Ibrahim Halawa had been visited 18 times by Irish embassy representatives, while Tánaiste Eamon Gilmore had raised the it with the Egypian Foreign Minister Nabil Fahmy and its Foreign Ministry “on a number of occasions”, and as recently again as last week at the EU Foreign Affairs Council.

Mr Costello expressed particular concern that, even though no specific charges had been brought against Ibrahim Halawa, he is scheduled to appear in court “with about 150 others” on July 16th.

In a statement tonight the Department of Foreign Affairs said that in its dealings with Egyptian authorities it had stressed “Ibrahim Halawa’s young age, the length of time he has already been in detention, and the necessity for him to return to Ireland as soon as possible to continue his studies for his Leaving Certificate examination as mitigating factors in his case”.

This was “in addition to the fact that his three sisters who were part of the same case and with him when he was arrested have already been allowed to return to Ireland”.

It pointed out however that it was “ precluded from getting involved in the judicial process” in Egypt, but added “we continue to remain seriously concerned at the continued detention of Ibrahim Halawa”.

The statement also pointed out that “in their extensive and ongoing contacts with the Department, the Halawa family has never requested a meeting with the Tánaiste”.