In new book, Benedict says he was a better professor but his pontificate was not a failure 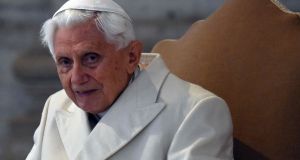 Pope Emeritus Benedict XVI at St Peter’s basilica in December 2015. “Practical government is not my strong point and that is certainly a weakness. But I cannot see myself as a failure,” he writes in his new book, The Last Conversations. Photograph: Vincenzo Pinto/AFP/Getty Images

Former Pope Benedict has acknowledged he was a better professor than a leader, revealing in a new book that he sometimes struggled to take decisions during his time in charge of the scandal-plagued Vatican.

However, in a book-long interview, the German-born Benedict, who is now 89, said he did not regard his eight-year stint as head of the world’s 1.2 billion Roman Catholics as a failure.

Benedict stepped down as pope in 2013, becoming the first pontiff in 600 years to resign, leaving behind a church tainted with scandals and snarled by mismanagement.

In excerpts of the new book published on Thursday by Italian newspaper Corriere della Sera, Benedict said he had not been comfortable in a leadership role.

“One of my weak points is perhaps a lack of resolve in governing and in decision taking. In reality I am more of a professor, a person who reflects and meditates on spiritual questions,” Benedict said in the book, The Last Conversations, by German journalist Peter Seewald.

“Practical government is not my strong point and that is certainly a weakness. But I cannot see myself as a failure.”

Benedict described difficult moments including scandals around child sex abuse by priests, which he was accused of not doing enough to stop, and over his lifting the excommunication of a Holocaust-denying bishop.

He also mentioned the “Vatileaks” case in which his butler leaked documents alleging corruption at the Vatican, but said overall there had been a “positive movement” during his papacy.

But Benedict said the elevation of Francis, whom he described as experienced at “practical reform” unlike himself, showed the church was moving forward.

Anger at the dysfunctional state the Vatican had fallen into in 2013 was one factor in the decision to choose a non-European pope for the first time in nearly 1,300 years.

Benedict, widely viewed as a shy, scholarly man, said he chose to write his resignation speech in Latin because he knows the ancient language so well that he could avoid any mistakes that he may have made in Italian.

A more unexpected anecdote emerged on Thursday when Seewald told German magazine Die Zeit that Benedict found “serious” romance when he was a “good-looking young man”.

“One of his fellow students told me that he had an effect on women, and vice versa. The decision in favour of celibacy was not easy for him,” Seewald said.

Seewald also recalled telling the ailing Benedict: “’Your 90th birthday is next year, you will surely still be around for that.’ And he said: ‘Well, hopefully not!’”