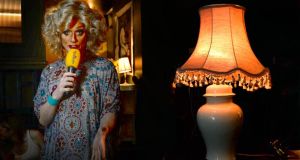 Fr Gerry O’Connor and Fr Seán Duggan, both Redemptorist priests based in Dublin’s Cherry Orchard parish, were nominated to do the challenge by local Fianna Fáil councillor Daithí de Roiste.

Dressed as Agnes Brown and Mrs Doyle (from Fr Ted) both priests completed the challenge in aid of the Irish Motor Neurone Disease Association and the ‘Tomorrow for Tomas’ campaign, in aid of a four year old Galway boy with spastic quadriplegic cerebral palsy.

They suggested that monies raised by their four nominees should go to the same charities.

Both priests are members of the Association of Catholic Priests, with Fr O’Connor on its leadership team. There is no suggestion that this has in any way influenced their nomination for deluge of either Archbishop Martin or Archbishop Brown. Perish (indeed) the thought.

Fr O’Connor is a frequent guest on TV3’s Tonight With Vincent Browne programme and has been in Cherry Orchard parish since the Redemptorists moved there, at the request of then Archbishop of Dublin Cardinal Desmond Connell, 11 years ago. Fr Duggan has been in the parish for the past four years.

Both men take a creative approach to ministry in a parish where Mass attendance is low as is participation in church activities generally.

For instance in February each year they hold a Candle Week when they hold retreats/novenas on such as ‘The Simpsons and God’, or on Mrs Brown or Mrs Doyle, in which they use clips from such programmes as inspiration for spiritual reflection.

The ‘Tomorrow for Tomas’ campaign has a Facebook page where further details are available.