Does science really say everything that can be said about life?

Opinion: ‘scientism’ wants to keep morality and philosopy out of the public domain 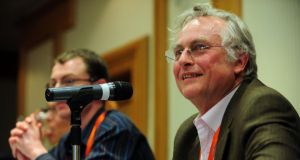 Richard Dawkins speaking at the World Atheist Convention in Dublin in 2011: evolution is a mindless, pointless process. Photograph: Aidan Crawley

Scientists rightly object to the description of science as faith, as is sometimes alleged by religious apologists. Science is precisely not faith. It is a process of discovery, whereby theories are tested against experience.

There is, however, something called “faith in science”. This is sometimes known as “scientism”, defined by the Oxford English Dictionary as “an excessive belief in the application of the scientific method”. Like many other “isms”, scientism is not a fixed or timeless doctrine. It has gone through many evolutions, and its current manifestation tends to include a deep hostility to religion and a trusting attitude to new technology.

Debate around scientism has become a hot topic in academia, and has revived traditional blow-ups between the sciences and the humanities. The latest to weigh in on the topic is cognitive scientist Steven Pinker who, in a lengthy article for the New Republic (newrepublic.com/ article/114127/science-not-enemy-humanities), argues scientism is “more of a boo-word than a label for any coherent doctrine” but then goes on to defend scientism as a legitimate philosophy.

In the process, he gets plenty of digs in at the humanities, suggesting the greats of philosophy like Descartes, Hume and Kant would have overcome their stumbling blocks with “some bit of 21st-century freshman science”. As for the custodians of their tradition, he writes: “Several university presidents and provosts have lamented to me that when a scientist comes into their office, it’s to announce some exciting new research opportunity and demand the resources to pursue it. When a humanities scholar drops by, it’s to plead for respect for the way things have always been done.”

Shedding religious baggage
But talking about scientism as though it only concerns tenured academics is misleading. This ideology is alive and well in society, and appears to have become a default position for well-educated, tech-savvy westerners who are now shedding any remaining religious baggage.

These followers of scientism – who shouldn’t be confused with scientists, and are perhaps better described as “sci-maniacs” – share broad characteristics. They’ve no patience for anyone who talks about spirituality; they believe the only things of note are those that are measurable; they think “morality” should be kept out of the public domain; and they reckon science should be allowed to dictate the future largely unimpeded. “Leave it to the experts” is their motto.

In essence, sci-maniacs are all about limiting the scope of public discourse, and even if you regard them largely as “straw men” you’ll have to admit there is a certain type highly intolerant of discussing “the meaning of life”.

This phrase in itself is contentious as scientists – and indeed many philosophers – will argue there is no “meaning of life”; there are only meanings which we allocate to our lives. Their argument has been strengthened by scientific discovery. As Richard Dawkins says, evolution is a “mindless, pointless process”. We could not have been designed with a purpose because “natural selection is all futile. It is all about the survival of self-replicating instructions for self-replication.”

This fact can’t be ignored by religious believers. They have to ask what sort of God would make humans part of such an aimless biological process. To their credit, sci-maniacs create discomfort for those who hanker after “the answer to the ultimate question of life, the universe, and everything”, to use the phrase of comic writer Douglas Adams. As if such an answer exists! (Adams’s “42” appears as good as any.)

Fortune-cookie phrase
But when people talk about the meaning of life they’re not necessarily thinking of a fortune-cookie phrase or a natty formula. Rather they’re expressing the idea that there is a point to their lives, or to human life in general, and that this “point” may be objectively or independently discernible now or at some future point.

There is a rich tradition in philosophy of exploring this in the context of a wider debate about values and morality. But scientism sees no merit in it.

Sci-maniacs may well believe that certain things (eg “doing science”) give life meaning. But discussing the pros and cons of rival meanings is a waste of time, in their view, as there is no legitimate authority which can resolve the matter. This leaves them open to the accusation that they are having their cake and eating it.

It should be stressed that, like today’s legion of campaigning atheists, followers of scientism are wrongly accused of having no values. They have values but speak of morality as though the matter was settled.

Pinker shares this trait, promoting a largely unexplained version of “humanism”, and welding on to it a paean for scientific invention.

There is a case to be made for a science-friendly, secular humanist outlook on life. This outlook may well be better than some other offerings in the current marketplace of ideas. But assuming this is the only legitimate mode of thinking is not science. Rather, it’s bad science.