Diarmuid Martin not calling for ‘conscience clause’ in vote 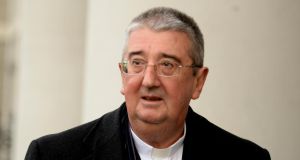 Archbishop Diarmuid Martin is not calling for a ‘conscience clause’ in the forthcoming same-sex marriage referendum, but says that a serious discussion is needed on the position of Christians troubled by the issue if the referendum passes. Photograph: Cyril Byrne/The Irish Times

The Catholic Archbishop of Dublin Diarmuid Martin has not called on the Government to introduce a “conscience clause” exempting Christians from complying with same-sex marriage legislation.

Speaking at an Iona Institute talk in Dublin on Thursday night, the archbishop called for more serious discussion on the situation of Christians troubled by the legislation should the May referendum be passed.

Speaking during a sometimes fraught question and answer session following his talk on the “Teaching of the Church on Marriage Today”, he was asked by Dr John Murray of the Iona Institute about the position of such Christians if same-sex marriage was made legal.

Archbishop Martin said: “I think freedom of conscience is probably one of the most fundamental of all human rights because it touches the very depth of a person and their identity. We have to redevelop a sensitivity to what that means.”

According to a recording of his reply, transcribed by The Irish Times, the archbishop said there was currently “not just in the media but in political culture, a culture of sound bites, a culture of quick answers, one-liners, which doesn’t foster this idea of people being able to reflect, express and develop their conscience”.

The archbishop said there was also “inconsistency”, as, “for example, somebody said religious solemnisers won’t be forced to celebrate gay marriages. What does that say? It’s saying . . . there is a conscientious question and we respect the conscience of religious solemnisers, mainly priests.

“Now people will say ok, if you are paid by the State you will do what the State tells you. That isn’t, in the long term, what even democracy is about. I do believe we have to stress that.

“[On] the other side, we have to respect the freedom of expression of others who may disagree with us, but I think this question of freedom of conscience is being pushed aside in debate and we’re getting very superficial answers about the way it is being addressed in our society and I believe that’s a much more serious problem.”

The archbishop said that people “are losing confidence in the political process”. This was “because politicians, political parties are becoming more and more insensitive to the way people are thinking and that they are not carrying out this process of mediation between the needs of the community and the views and desires of citizens.

In his talk, Archbishop Martin repeated that the Catholic bishops did not support the referendum and called on people to reflect on the implications for marriage of it being passed.

The archbishop also called for the debate “to be carried on respectfully without the use of intemperate language”.

He said he felt “obliged to say that I have received in recent times correspondence from people who support a ‘No’ vote in the referendum in which the language used is not just intemperate but obnoxious, insulting and unChristian in regard to gay and lesbian people.

“If people use such language to support a position they feel is Christian, then all I can say is that they have forgotten something essential about the Christian message.”