Diarmaid Ferriter launches new book, A Nation and Not a Rabble 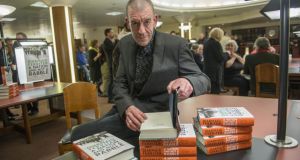 Historian and Irish Times columnist Diarmaid Ferriter at the launch of his new book A Nation and Not A Rabble: The Irish Revolution 1913-1923. Photograph: Brenda Fitzsimons/The Irish Times

Historian and Irish Times columnist Diarmaid Ferriter has warned against “shameless celebrations” of Ireland’s past and the downgrading of history in schools.

Speaking at the National Archives in Dublin last night, at the launch of his book A Nation and Not a Rabble: The Irish Revolution 1913-1923, Mr Ferriter said: “We do not need to contrive an ahistorical or retrospective consensus about the contemporary impact and legacy of divisive events . . . But neither do we require shameless celebrations of the revolution and historians do not need to be flag waving at party political conferences. Let us be dignified.”

Mr Ferriter said it was possible “to call for the hardening of soft centred commemorative aspirations or contrived peace process-inspired commemoration without being crass”.

“Let us commemorate honestly and not unthinkingly celebrate - this is, after all - a partitioned island as a result of the revolutionary decade.”

Concerning history in schools, he said: “Our remembrance needs to be an informed one and we need our cultural institutions robustly supported and centre stage . . . We need to challenge the denuding of citizenship, and that includes the downgrading of history in our education system.

“People need history so that they do not live, as [historian] Eric Hobsbawn put it, ‘in a sort of permanent present, lacking any organic relation to the public past of the times they live in’.”

The book was launched by Catriona Crowe, head of special projects at the National Achives. She described it as “a clear-eyed, accurate, intensely human and endlessly interesting version of the events which have obsessed generations of Irish people.”

Coronavirus: Northern Ireland death toll rises to 28 15:06
Labour TDs criticise decision for Dáil to sit on Thursday 15:02
Coronavirus: Nearly 600 prisoners released since start of outbreak 14:25
Teacher who admitted having child abuse images struck off register 14:20
Freedom of movement of EU nationals must be in accordance with law, judge says 14:10